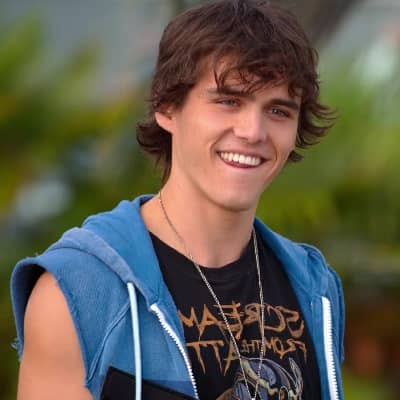 As of now, Charlie Gillespie’s relationship status is single. Even if he is in a relationship, there is no information about his romantic life and girlfriend.

Who is Charlie Gillespie?

Charlie Gillespie is a Canadian actor, model, theatre artist, and singer. Charlie is renowned for his starring role as Luke, the lead singer of the band Sunset Curve, in the Netflix series Julie and the Phantoms. He gained recognition from the TV Series, Charmed.

Charlie was born on August 26, 1998, in Dieppe, New Brunswick, Canada. As of 2020, he is 22 years old. He holds Canadian Nationality. His Nickname is Charlie. He is of Caucasian ethnicity. His Zodiac sign is Virgo.

Charlie was raised by his mother whose name is Jeanette. He has three older brothers Ryan, Patrick, and Michael, and also one younger sister Meghan. There is no information about his father.

Since his childhood, he used to play acoustic guitar. He is interested in music. Charlie and his siblings used to play instruments and sing together when they were children.

Furthermore, there is no data on his Education and Qualification.

Charlie moved to Los Angeles to pursue acting. Gillespie started his career as a theatre artist. He debuts his feature film from the Czech film ‘The Outlaw League’ in 2014. He got his first lead role in the Speed Kills movie as ‘Andrew Aronoff’ in 2018.

The actor was recognized for his main roles in Runt, The Rest of Us, and Charmed. After gaining success he has played the role of Luke in the Netflix series, ‘Julie and the Phantoms’ in 2020 which starred Madison Reyes, Jeremy Shada, Savannah Lee May, and Owen Joyner.

Later, he wrote and performed the song, Perfect Harmony, which is part of the series soundtrack with Madison Reyes.

The actor was Nominate for the Joey Awards in the category of Best Leading Actor and Ensemble in 2017.

As an actor, model, singer, and theatre artist, Gillespie earned a good amount of income in his career. It has an estimated net worth of $100,000-$500,000 US dollars approximately.

Charlie Gillespie is far away from the scandals and controversy. As an artist, he is in rumors for his charm, good-looking, and decent personalities in social media.

Charlie’s height is about 5 feet 7 inches. His weight is about 65 Kg approximately. He has a Hazel eye color and brown hair color. His shoe size is 7.