Charlie Kirk is an activist, author, and professional meme maker. He is single probably since he keeps his personal life out of media reach. 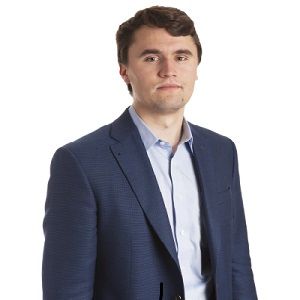 Our most successful lawsuit recently was at [Macomb Community College], several of these schools believe they can impose any rules and speech codes they wish. We find it to be even worse at times on the local level.

We're recalibrating. We have to because for eight years we were the resistance, and that's a fun label to play and now the left is embracing that.

Charlie Kirk is possibly single. He shares a good bond with friends and family.

He likes to keep his personal life private. His previous relationship is also hidden from media.

Who is Charlie Kirk?

He is also the founder and president of Turning Point USA, a 501c-3 nonprofit advocating on college campuses in the U.S. for free markets and limited government.

Charlie Kirk’s hair color is light brown and their eye color is brown. His birth sign is Libra. His father’s name is Robert W. Kirk, who was a project architect manager for Trump Tower. He is from a well-off family from Illinois.

Charlie is an evangelical Christian by birth. Charlie Kirk was raised in Wheeling Illinois.

When he was in 7th grade, he worked as a volunteer for Mark Kirk, who is an American politician.

During his high school years, he worked on Kirk’s Senate campaign. When Charlie was studying in high school time, he had thought and dreamt of studying in the US Military Academy.

But later he entered into the political world as he was ejected from West Point.

In 2012, he wrote an essay for Breitbart titled ‘Liberal Bias Starts in High School Economics Textbooks.’ He gained national attention for his essay, made an appearance on Fox News.

Kirk was the youngest speaker at the 2016 Republican National Convention before starting his career. At Benedictine University’s Youth Empowerment Day, he met Bill Montgomery, who motivated him to skip Baylor and join politics as his career.

Charlie has also made a guest appearance as a journalist on Fox News, CNBC, and Fox Business News.

Charlie Kirk is also the founder and president of Turning Point USA. It is a right-wing non-profit organization established in 2012. The group also sponsors Professor Watchlist, a website cataloging radical leftist professors.

The organization’s mission is:

“to identify, educate, train, and organize students to promote the principles of fiscal responsibility, free markets, and limited government.”

Charlie Kirk published his first book in 2016 titled, Time for A Turning Point. Kirk joined the campaign of Donald Trump70 days prior to the 2016 election.

Charlie serves as an Executive Director of a Non-Profit organization that is based in the United States. He has maintained a fortune of wealth from his career earnings. He has an annual salary of $100K and a net worth of $2 million.

He is not into any rumors but clears them on Reddit. No major controversy embroils him.

There is no reliable mention of his s height, weight, and other body measurements. He has brown hair and eyes.