Popular as one of the most glamourous models.

Charlie’s relationship status is single and she isn’t found dating anyone yet.

The model may be focused on building her professional life or maybe not disclosing about her lovelife either. 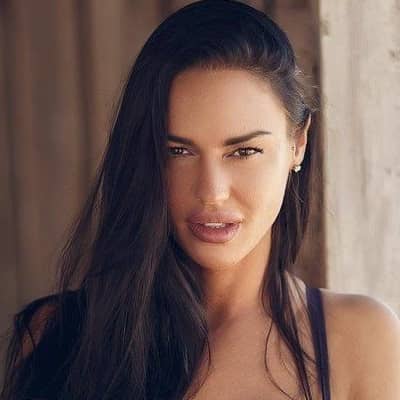 Who is Charlie Riina?

Charlie Riina is popular as one of the most glamourous models. She is also a social activist.

Riina has made several appearances for Playboy magazine and also on the cover of Playboy’s Poland, Slovakia, Czech Republic editions.

Charlie was born on January 4, 1984, in Poland. Her birth name is Ania Krosinska.

The information about her family and siblings is unknown. She belongs to Canadian nationality and is of Polish ethnicity.

She studied Criminology and Forensic Sciences at the University of Toronto.

Charlie Riina’s modeling career started when she was scouted by famous and known modeling agencies for Ford and Elite. Besides that, she also competed in many beauty competitions. She won the Miss Hawaiian Tropics twice. Also, she is Miss Toronto and Miss Playboy Lingerie.

Charlie modeled for Playboy USA and became Playboy Playmate of the Month in April 2015. She represented Canada in the International Vegas Model Search.

Not just modeling, she was scouted for commercials and video shoots. Charlie also acted in movies; All-In (2012) and First Kill Redemption (2015).

She was again named Playboy’s International Playmate of the Year in 2016.

Moreover, she describes herself as a humanitarian activist. She is widely known to be part of the “138” Water Campaign focusing on the Terrorist Attack worldwide, especially in Paris (Cartoonist murder). She was also posing with the caption”Je Suis Charlie” on their T-shirt.

After this, The People’s Party of Canada leader Maxime Bernier has hired her as his new candidate in Toronto. She is in the PPC’s new candidate as Ania Krosinska in Humber River-Black Creek, a riding near Toronto.

This isn’t her first venture into politics, though. Riina was a candidate for the Trillium Party of Ontario in 2016 also.

She was so good at playing chess and received various awards in Canada for chess.

Her net worth is around $1 million.

The income source of Charlie is from her modeling and she also earns from the endorsement of different products and promotions.

She has maintained a good relationship with everyone in his personal and professional life. And so, her name is out of all these rumors and controversies.

Charlie Riina stands with a height of weighing 54kg. Being a model, she has the perfect slim figure with body measurements of 32C-24-34 inches.

She has brunette hair and dark brown colored eyes.

She has over 677K followers on Instagram. She isn’t active on Facebook but has a fan page with around 22K followers.

Also, get to know the bio of other models like India Reynolds, Noemie Lenoir, Yasmeen Ghauri, and Elijah Canlas.