Charlie Rose had a relationship with American TV Personality, Sonja Morgan, for a brief period of time. He was married to Mary Rose in 1968. They met while attending a ceremony in Duke. The 12-year marriage ended in divorce in 1980. The reason behind the separation is not known. They don’t have children from this marriage.

In 1980, he dated American Actress Sandahl Bergman. He is currently in a relationship with Amanda Burden. The pair has been in a relationship for more than 24 years as of now. Amanda’s previous 2 marriages didn’t last long. She is the stepdaughter of CBS founder William S. Paley. Amanda has two children from her first husband. 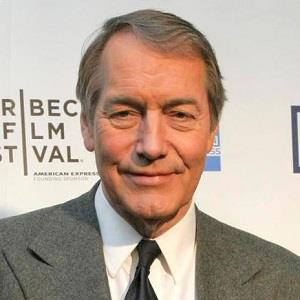 The great regret of my life is that I didn't have children.

The question is just as important as the answer.

I'm an only child, so I don't even have nieces or nephews.

Who is Charlie Rose?

Charlie Rose is an American television talk show host and journalist. He is the host of ‘Charlie Rose’. Additionally, he is also a co-host of ‘CBS This Morning’. In addition to that, he has 10 credits as an actor in various movies and television series.

Charlie was born in Henderson, North Carolina on January 5, 1942. He is the only child of Margaret and Charles Peete Rose, Sr. During his early life, he lived above his parents’ store in Henderson. Furthermore, he helped out with the family business from the age of seven. In his childhood, he was involved in Fresh Dialogues interviews due to his insatiable curiosity. He is of American nationality and belongs to a mix of English and Scottish ethnic backgrounds.

Initially, BBC hired Charlie’s wife Mary. Later, Charlie handled some assignments on the BBC on a freelance basis. Afterward, he landed a job as a reporter for WPIX-TV. Then, Bill Moyers hired Rose as managing editor for the PBS series ‘Bill Moyers’ International Report’. He soon became the Executive Producer of ‘Bill Moyers Journal. Similarly, KXAS-TV in Dallas–Fort Worth hired him as a program manager.

From 1984 to 1990, Charlie worked for CBS News as the anchor of ‘CBS News Nightwatch’. On September 30, 1991, ‘Charlie Rose’ premiered on PBS station Thirteen/WNET. In addition, he also became the correspondent for ‘60 Minutes II’ from January 1999 until September 2005. From 2003 to 2009, he was a member of the Board of Directors of Citadel Broadcasting Corporation. Next, ‘CBS This Morning’ replaced ‘The Early Show’ and Charlie returned to CBS to help anchor. Some of the celebrities and political figures that he has interviewed are Donald Trump, Bill Gates, Steve Jobs, Sean Penn, Bashar al-Assad, and others.

Charlie won the Business and Financial Reporting Emmy Awards in 2003 for ‘60 Minutes II’. He also garnered the CableACE Awards in 1993. Furthermore, for ‘60 Minutes’, he was nominated for News & Documentary Emmy Awards. On May 8, 2016, he received an honorary degree from the University of the South. Additionally, he won the Walter Cronkite Award for Excellence in Journalism in 2015. All in all, he has a total of 4 wins and two nominations to his name.

Charlie was a part of several conversations during 2002. This was due to the elective open-heart surgery he had to repair a faulty valve. Later, he had heart surgery in Paris on March 29, 2006. His show has been part of several controversies as of now. In 2012, ‘The Charlie Rose show agreed to pay as much as $250,000 to settle a class-action lawsuit. This was brought by a former unpaid intern who claimed minimum-wage violations. Additionally, his interview with Barack Obama brought up one of the several scandals surrounding the liberal administration. In addition, Amy Schumer’s comment in his show was also termed controversial. There were rumors that Charlie might be single again. However, the rumors turned out to be false. In addition, he was also rumored to be retiring.

Charlie has a height of 6 feet 3½ inches (1.92 m) and weighs is 85 kg. Additionally, his hair color is light brown and his eye color is brown.

Also know more about the early life, career, net worth, relationships, and controversies of other hosts and journalists including Andy Adler, Andrew Marr, Michael Rowland, LZ Granderson, and Sandie Rinaldo.