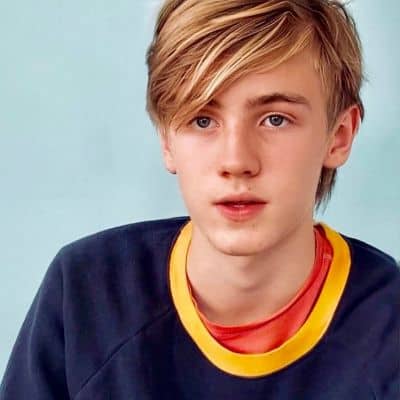 Talking about his relationship details, Charlie Shotwell is presently single and he is not dating anyone at the moment. He is too young to engage in any kind of relationship.

Moreover, Charlie has been secretive towards his relationship details and affair news. He might be focused on his studies and career right now.

Who is Charlie Shotwell?

Charlie Shotwell is a well-recognized American actor and television star. Shotwell is widely famed for his role of Nai Cash in the 2016 comedy-drama film, Captain Fantastic.

Charlie Shotwell was born on 17 July 2007. At present, he is 14 years young star. Likewise, his birthplace is Madison, Wisconsin, the USA.

Not much is known about his father and mother’s details, Charlie has been secretive towards his family details. Moreover, he has two brothers, Jimmy and Henry Shotwell. Also, he has a set sister named Shree Crooks.

Talking about his nationality, Shotwell holds an American identity whereas his ethnicity is Caucasian.

Regarding education, the star might be in his higher education at the moment. He has not shared his educational background with the public till now.

Charlie began his acting career making a debut with the war drama, Man Down. He then featured as the youngest member of a survivalist left-wing philosopher’s family in the comedy-drama, Captain Fantastic. Likewise, the star also performed the role of young Brian Walls in the Destin Daniel Cretton drama, The Glass Castle.

Very soon, the juvenile star appeared as a guest star in the episode of the TV series, Chicago Justice. Shotwell then gained high recognition after portraying the role of a young John Paul Getty III in All the Money in the World in 2017. Next year, he featured as an English convict in the drama-thriller, The Nightingale.

Recently, Charlie performed in family-thriller, The Nest in 2020 where he was seen in the role of Benjamin O’Hara. In 2021, he played in the psychological thriller, John and the Hole, directed by Pascual Sisto.

As per different reports, Shotwell will feature in the role of Michael Morbius in the upcoming superhero film, Morbius in 2022.

A famed star, Shotwell has earned a handsome amount of money from his profession. He has been active in his profession from the year 2013 till the present.

It is reported that Charlie Shotwell has an estimated net worth of $100k-$500k.

However, the child actor has not disclosed his exact salary, earnings, and assets details till now.

Charlie has never been part of any controversial matter or rumors till now. The star has been preoccupied with his professional and private life.

It seems that Shotwell prefers enjoying his personal life and does not want to merge it with his professional life.

14 years young star, Charlie has handsome looks and an admirable personality. He stands at a height of 6feet. Also, he has a balanced body weight of 70 kg.

Furthermore, Shotwell has blue eyes whereas his hair is blonde.

Regarding his social media presence, Charlie Shotwell is an active personality on social media. Charlie has more than 42.3k followers on his official Instagram account @cgshotwell.