Charlotte Hawkins is a Presenter of @gmb & @classicfm, Host of @lastpastblast. Charlotte is married and a mother of one. 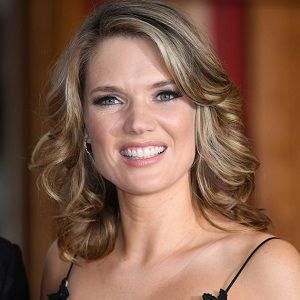 Charlotte Hawkins is a married woman. She married to Mark Herbert on August 23, 2008. The couple took their vows at Chichester Cathedral where Hawkins father was a clergyman.

On February 8, 2015, Charlotte gave birth to a baby girl. Her daughter name is Ella Rose. Hawkins is living a happy married in the Surrey commuter belt, in a big old house with a dog called Bailey.

Who is Charlotte Hawkins?

Hawkins joined ITV in 2003 where she presented the regional news program and left ITV in 2006 to join Sky.

She was born on May 16, 1975. She is from Chichester, West Sussex, England. Her birth name is Charlotte Mary Hawkins. Charlotte’s father name is Frank Hawkins. Information on her mother is unknown. Charlotte loved traveling and writing since her early childhood.

Charlotte attended Bishop Luffa School in Chichester. She studied English Language and Literature at Manchester University and then completed a postgraduate diploma in Broadcast Journalism. She loves to travel and enjoys horse riding, cycling, and sailing.

Charlotte Hawkins worked at ITN Radio before joining ITV Meridian as a producer and reporter. At ITN she worked as a newsreader and reporter for LBC Radio. She joined ITV From October 2003 and worked as co-anchor of their main news programme Meridian Tonight.

In December 2006 Charlotte Hawkins left ITV and joined Sky News in January 2007, where she presented Sunrise each Monday to Thursday with Eamonn Holmes. She left Sky New on March 2014.

She rejoined ITV in 2004 and made her debut on Good Morning Britain on 28 April 2014, where she co-hosts the show with Ben Sheperd, Sean Fletcher and Sussana Reid from 6:00 am to 8.30 am, every day except Thursdays.

Her role on Good Morning Britain is of newsreader four mornings a week and covers as the main presenter during holidays and absence.

Hawkins presents her own Classic FM music show on Sunday afternoons from 3–5 pm that started on January 7, 2018.

Charlotte Hawkins has not won any awards to date. Hawkins took part in the Fifteenth Series of Strictly Come Dancing on BBC One pairing with professional dancer Brendan Cole on August 2017. The pair survived till the fourth week of the competition.

Her salary details remain unknown. Her net worth is between $1 Million – $5 Million according to the sources.

She was topic of gossip in 2017 when she took part in the fifteenth series of Strictly Come Dancing on BBC one when her dancing partner Brendan Cole twitted “She loves looking into my eyes!” Charlotte in an interview with the Daily Mail’s Weekend Magazine admits that she found the sexy dances with Brendan Cole to be mortifying.

She is 5 feet 8 inches tall and weighs 58 kg. She has blue eyes and her hair color is a natural blonde. Details on her body measurements and vital statistics are unknown.