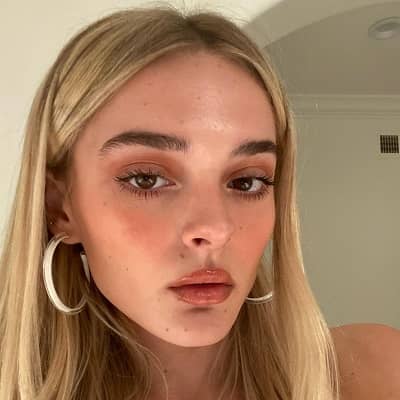 What is the relationship of Charlotte Lawrence?

Considering her relationship status, Charlotte Lawrence is presently single and she is not dating anyone till now.

It seems she is very busy making her career and does not want to be part of a relationship.

However, Charlotte has dated pop singer, Charlie Puth in 2019 previously. Sadly, their relationship did not stay long.

Who is Charlotte Lawrence?

Charlotte Lawrence is a well-reputed American singer, songwriter, as well as model. Lawrence is popular for her first Extended play, ‘Young’. She came into the limelight after the release of her single You’re the One that I Want in 2017.

Charlotte Lawrence was born on 8 June 2000. As of now, her age is 20 years old. Likewise, her birthplace is Los Angeles, California, USA.

Charlotte is the daughter of her father, Bill Lawrence, and her mother, Christa Miller. Professionally, Bill is a television producer and Christa is a well-reputed American actress.

Also, she is the special- niece of actress Susan Saint James. The singer has two younger siblings brothers, William and Henry Lawrence.

Talking about her nationality, Lawrence holds an American identity whereas her ethnicity is mixed.

Regarding education, she studied at Marymount High School in Los Angeles. Charlotte was a team member of the volleyball and basketball teams.

Professionally, Charlotte Lawrence is a well-named singer, songwriter, and model as well. Lawrence had begun her modeling career at the age of 14 years old before pursuing her music career officially.

Likewise, she has emerged on print shoots for different cosmetic and clothing brands as a juvenile.

She hit the success of her career when the singer contracted with ‘IMG Models’, one of the great American modeling agencies. Charlotte has emerged on the front page of different magazines such as ‘Teen Vogue’ and ‘Harper’s Bazaar’.

Formally, the young talent started her musical career in 2014 when she debuted her first single ‘The Finish Line. She earned high popularity on social media networks.

Following her debut, Charlotte launched songs like ‘Even After’ and ‘You’re the One That I want. The song was a hit and the famed singer no more remained just a ‘pretty model’.

Lawrence identified herself in the music world. Moreover, she released two songs, ‘Seventeen’ and ‘Sleep Talking’ which again reached the hype.

In 2016, she collaborated with ‘Dixie Chicks and was highly known by the public. Charlotte got invited to collaborate with the band by Natalie Maines.

Freshly, Lawrence released a single, ‘Psychopath’. The song collaborated with artists such as Nina Nesbitt and Sasha Sloan. Additionally, she emerged in another single, Keep Me Up.

Talking about her income, Charlotte is a well-named singer and a star personality who has earned handsome money from her profession.

She has been in her profession from 2014 till the present. It is reported that Charlotte Lawrence has an estimated net worth of $20 million as of 2022.

Though she has not mentioned her exact earnings and salary, Lawrence has lived a luxurious life.

Charlotte has never been part of any controversial acts or scandals till now. It seems she has a very clear profile and enjoys her personal life.

Moreover, she has maintained her personal and professional life properly.

She stands at a height of 5 feet 10 inches. Additionally, she has a balanced body weight of 58 kg.

Lawrence has dark blonde hair color whereas her eye color is brown. She regularly dyes her hair with blonde, green, and blue colors.

She has more than 8255k followers on her official Instagram account @charlotteslawrence. Also, she is active with more than 115k followers.

Likewise, Lawrence is available on Twitter with nearly 45k fans and supporters.

She also owns a YouTube channel and it has more than 214k subscribers to date.

It seems that he is blissfully enjoying her social media life.