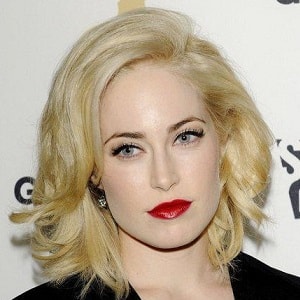 “UNICEF is such a special organization, and to spread the word just makes me so happy.”

What is the relationship of Charlotte Sullivan?

Charlotte Sullivan is married to Peter Stebbings. Her husband Peter is a Canadian actor, director, producer, and screenwriter. They have welcomed a daughter, whose name they have not revealed was born in 2015. They are currently living together and happily.

Who is Charlotte Sullivan?

Charlotte Sullivan is a Canadian actress. She is famous for her role in the Global police drama series ‘Rookie Blue’ as officer Gail Peck.

She was born on October 21, 1983, in Toronto, Ontario, Canada. She is currently 38 years old. She has not provided information about her parents, siblings, and her childhood. Charlotte holds Canadian citizenship but her ethnicity is unknown.

She graduated from high school at Runnymede Collegiate Institute.

She started acting professionally in her early childhood. She made her first on-screen role in a Liza Minnelli music video. Charlotte starred in the film ‘Harriet the Spy’ in 1996 and the CBS series ‘The New Ghostwriter Mysteries’ in 1997. She played smaller parts in the films ‘How to Deal’ in 2003 and ‘Fevr Pitch’ in 2005. She portrayed the role of Katie in the drama television series ‘Across the River to Motor City’ in 2007.

Charlotte played in the fourth episode of the eighth season of ‘Smallville’ as Maxima in October 2008. She played Officer Gail Peck in the police drama series ‘Rookie Blue’ in 2010, which aired on ABC in the USA and on Global in Canada. She appeared as Marilyn Monroe in the Canadian-American miniseries ‘The Kennedys’ in 2011.

She was nominated for an Academy of Canadian Cinema and Television Award for her performance in the 2011 film ‘Edwin Boyd: Citizen Gangster for Best Performance by an Actress in a Supporting Role.

How much does Charlotte Sullivan earn?

There is no information available regarding her salary and income. As of 2022, she has an estimated net worth of $3 million. It is under review.

She became a victim of an apparent leaked nude photos scandal. Her photos were leaked online through hacked phone on February 14, 2019.