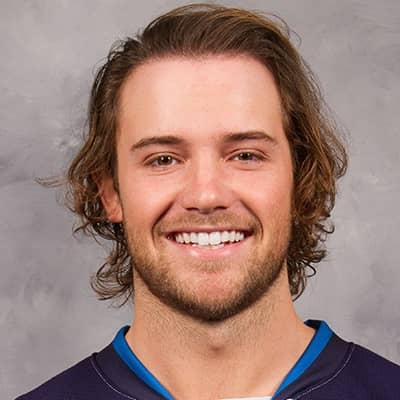 Though the player seems to be dating Eliana Jones. Eliana is a Canadian Actress famous for appearing in Hemlock Grove.

Both of them share their pictures together on their social media accounts. They seem to be happy with each other and also seen spending vacations together.

Who is Chase De Leo?

Likely, he played from Anaheim Ducks in the National Hockey League (NHL).

He holds an American nationality and is of Italy and English ethnicity.

De Leo played for the prestigious Los Angeles Selects program, with his teammate and close friend Eric Comrie in his young age.

There is no information collected regarding his academics.

His junior career started when he played along with Western Hockey League’s Portland Winterhawks. He played for four seasons from 2011 to 2015. Chase finished it with 251 points in 279 regular-season games, which included back-to-back 39-goal seasons.

Being part of Winterhawks 2013 WHL championship team with 58 points in 81 playoff games he led up to Memorial Cup finals. So after his such good performance, The Winnipeg Jets selected De Leo in the fourth round of the 2014 NHL Entry Draft.

No sooner after his junior career, De Leo was assigned to the Manitoba Moose the Jets’ top minor league affiliate in 2015. His professional season was mostly with the Moose but he was called back by the Jets on March 20, 2016.

He makes his NHL debut on March 20 against the Anaheim Ducks. De Leo played one more game for the Jets. He was traded by the Jets to the Anaheim Ducks in exchange for Nic Kerdiles on June 30, 2018.

After it, he again returned to the AHL. At the 82nd season of the American Hockey League, he was an impending restricted free agent following the 2017–18 season.

Meanwhile, Leo plays for the San Diego Gulls of the American Hockey League (AHL), as a prospect of the Anaheim Ducks in the National Hockey League (NHL).

De Leo was also a member of Team USA at the 2015 World Junior Ice Hockey Championships. He has built a successful career with a good record up to now.

Chase’s net worth is around $5 million.

In the AHL, the median player makes approximately $65,000 annually. An average professional in the NHL makes around $2.5 million per year.

Tis player is more focused on building his career and hasn’t been part of any rumors and controversies yet.

He has brown colored hair and light brown eyes.

Also, get to know about other players like David Lee, Jack Brewer, Chris Samuels, and Erik Compton.