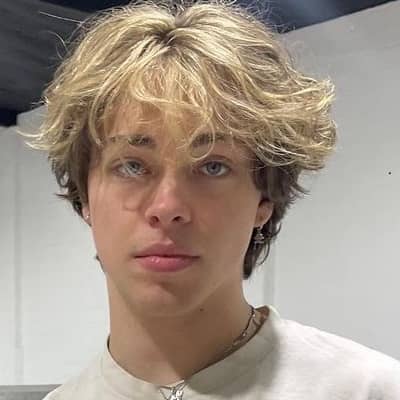 Currently, Chase Keith’s relationship status is single. He doesn’t seem to date anyone at the moment. He remains low-key when it comes to his private life.

Also, he has not disclosed any information about his past affairs.

Who is Chase Keith?

Chase Keith is one of the prominent TikTok, YouTube, and social media stars from the United States.

Along with that, he is a model and he has collaborated on various projects such as Aeropostale and Disney.

He holds an American nationality and belongs to the Caucasian ethnicity. According to the astrologist’s birth chart, his sun sign is Scorpio.

He was born to his mother Jamie Keith.

Adding up more info, he has not revealed any detailed info about his father.

Talking about his educational background, he attended Summit Trail Middle School when he was young.

After that, he joined Tohana High School for his further study.

Chase Keith had a keen interest in acting and modeling since he was young.

Nowadays, he is famous and widely known by all.

Before starting his career as a YouTuber and TikTok, he performed on several social platforms such as Live.Ly, and Live. me.

After appearing on such a platform, he was able to gain a lot of public attention and he started raising in the public eyes.

Keith also served as a model, and he has signed and Co-operated with Xespansione Fashion XM corporation.

Chase Keith’s youtube channel has almost more than 133K subscribers as of 2022.

In 2018, he started his career as a YouTuber, his first youtube video was HOW TO LAND A BOTTLE 99.786 & OF THE TIME. This video has almost crossed 12k Viewers.

Likewise, in 2021 he uploaded the video THE CAUSTIC SHOW ESPOSIDE 1, this video almost gained more than 305K viewers most-watched youtube video on his channel.

Till now, he has not been a part of any rumors and scandals. He has not indulged himself in any part of rumors and controversy.

Chase Keith is a young handsome boy, whose height stands at 5 feet7 inches and weight of around 60 kg. His body measurements are under review at the moment.

Besides that, he has fair skin complexation and he has blond hair with pairs of pretty eyes.

Chase Keith has a huge fan following on his social networking sites, As of 2022, his verified Instagram account has more than 1M Followers with 1565 Following under the username @chasekeith.

Bang Bang! Keith McCurdy’s life story from a school dropout from Delaware to a celebrated tattoo artist in New York!