Chase Utley is an American former professional baseball second baseman. He played in Major League Baseball for 16 seasons, primarily for the Philadelphia Phillies.

Chase Utley is a married person. He has been married to his longtime girlfriend Jennifer Cooper since 20 January 2007. He and his wife met the very first time while they were undergrads at UCLA.

This couple is avid animal lovers and has raised over $45,000 for the Pennsylvania Society for the Prevention of Cruelty to Animals. 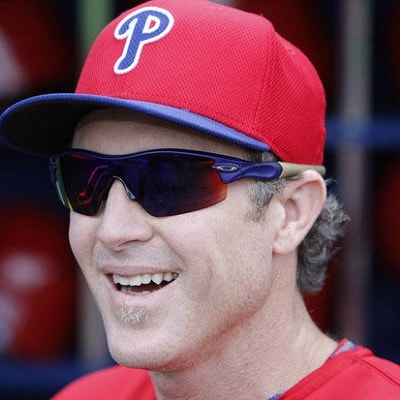 Who is Chase Utley?

He has also played for Los Angeles Dodgers.

He was born on December 17, 1978, in Pasadena, California. His birth name is Chase Cameron Utley and he is currently 41 years old.

He was born to his mother Terrell Utley and his father David Utley. He has a sibling- a younger sister named Taylor Ann.

He played for the UCLA Bruins during his college time and he was drafted in the 1997 Major League Baseball draft by the Los Angeles Dodgers with the 76th pick but turned down the offer to attend UCLA.

Chase was drafted by the Philadelphia Phillies in the 15th pick of the first round in the 2000 amateur draft and made his MLB debut on April 4, 2003, as a pinch hitter against the Pittsburgh Pirates.

In addition, he played for the  Philadelphia Phillies until the 2015 season and in June 2015, he was placed on the 15-day disabled list due to right ankle inflammation and returned to the field on July 7.

On August 19, 2015, he was traded to Los Angeles Dodgers and played the rest of the season for the Dodgers. In December 2015 he re-signed with the Dodgers on a one-year with $7 million contracts and renewed a one-year, $2 million in February 2017.

Later, he re-signed with the Dodgers for two years and $2 million in 2018 but in July 2018 he announced his intention to retire after the 2018 season. Then in June 2019, he finally exited from the Baseball game.

He was awarded a Fielding Bible Award for his statistically based defensive excellence during the year and he was the co-recipient of the 2005 Mike Schmidt Most Valuable Player Award.

He has an estimated net worth of around $50 million and he has earned that sum of money from his professional career. Also, he earns around $15 million per year as an annual salary.

His playing career has helped him in earning fame and fortune.

Chase Utley has blue eyes and grey hair. He stands at a height of 6 ft. 1 inch and weighs 91 kg. Other information regarding his shoe size, dress size, etc. is unknown.

To know more about Kent Bazemore, Romeo Langford, and Corey Holcomb, please click on the link.