Chasten Buttigieg is an American teacher, advisor, spokesperson, social media campaigner, author, and LGBTQ rights advocate. He is married and a father of two kids.

Chasten Buttigieg is openly gay. After completing high school, he informed his parents of his homosexuality at the age of 18.

At first, his parents were against it but later accepted his decision. On June 16, 2018, he gets married to Pete Buttigieg in St. James Episcopal Church Cathedral in America. Pete is a politician and former Naval Intelligence Officer.

The couple met through a dating app, Hinge in 2015. After two years of relationship, they got engaged in December 2017 at O’Hare International Airport. In September 2021, they welcome their twin children named Joseph August and Penelope Rose.

Pete became the first openly gay cabinet secretary to become a parent while in office. 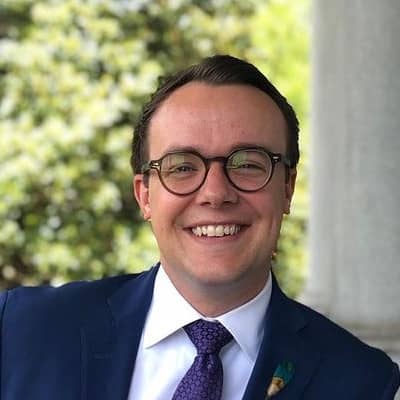 Who is Chasten Buttigieg?

He is better recognized as the spouse of Pete Buttigieg who is currently serving as the U.S. secretary of transportation.

He is the youngest child of Terry Glezman (father) and Sherri Pelon (mother). His father is an owner of a landscaping business whereas his mother is a nurse by profession.

He was raised in Chums Corner in a conservative Roman Catholic family along with two older brothers named Rhyan Edward Glezman and Dustin Mckenzie Glezman.

Further, he holds an American nationality whereas he belongs to the Caucasian ethnicity.

In 2014, he graduated with a bachelor’s degree in theater and global studies. He obtained a master of education degree in 2017 from DePaul University in Chicago.

During his teenage, he worked at a cherry products store, Cherry Republic, and also drove tractors on his grandfather’s cherry farm in Suttons Bay.

When he was 18 years old, he was sexually assaulted by a friend of a friend which he shared in his memoir.

Chasten is estimated to have a net worth of around $600 thousand as of 2022. His salary and other earning are still under review.

Talking about his partner’s income, Pete has an estimated net worth of around $250 thousand. His salary is around $104 thousand per year.

Talking about Chasten’s physical appearance, he has a fair complexion. He stands at the height of 5 feet 10 inches tall and his weight is about 78 kg.

Likewise, he has a blue pair of eyes and his hair color is light brown.

He has also a self-titled YouTube channel with nearly 3.96k subscribers.