Chaz Bono is at present in a relationship with Shana Blue. They started dating each other from 2017. It seems that this couple is enjoying each other’s company. As they regularly seem hanging out together.

However, Chaz was once in a serious relationship with his ex-girlfriend Jenifer Elia. The two also became engaged in 2011. But their engagement called off in Dec 2011. Moreover, they started dating in 2005 but the couple could not last long parted ways after over six years of relationship. 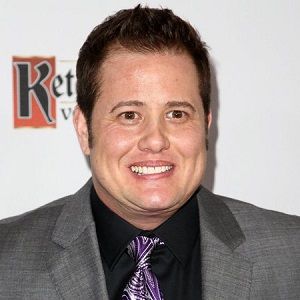 It really bothers me when I see people doing my mother in drag. I mean, just imagine if you saw people doing that with your mother.

I was never a lesbian.

Who is Chaz Bono?

An American writer, musician, and actor, Chaz Bono has earned an Emmy Award for writing his experience in the documentary, ‘Becoming Chaz.’ Other than his television appearances, he has authored two books, such as ‘Family Outing’ and a memoir, ‘The End of Innocence.’ Notably, Bono has competed in ‘Dancing With the Stars.’

Chaz Bono was born in Los Angeles, California, the United States on March 4, 1969. His birth name is Chaz Salvatore Bono and he is currently 50 years old. His father’s name is Sonny Bono (LGBT rights advocate) and his mother’s name is Cher Bono (singer). Likely, Bono was named after the film Chastity, which was produced by Sonny and in which Cher (in her first solo role in a feature film) played a bisexual woman. Unfortunately, Sonny and Cher’s marriage ended in a bitter divorce when Chaz was six years old.

Talking about his education, he attended ‘The High School of Performing Arts’ in New York City, where he befriended Jennifer Aniston.

Talking about his profession, Chaz Bono started his short music career in 1988 with the band Ceremony. Whereas, the band released an album titled, Hang Out Your Poetry, in 1993. Likewise, the band featured Bono on vocals, acoustic guitar, and percussion.

All but one of the songs were co-written by Bono, Shink, and Mark Hudson. Sonny and Cher also recorded backing vocals for the track Living It Upon on the album. During 2002, Bono published a memoir entitled The End of Innocence. Chaz Bono also worked as a writer at large for The Advocate.

In 1995, Bono came out as a lesbian in an interview with The Advocate. Since then, he has been an LGBT activist.

Chaz Bono became the spokesperson for the Human Rights Campaign, promoted National Coming Out Day, campaigned for the reelection of Bill Clinton for US President.

He also became a competitor on the 13th season of the US version of Dancing With the Stars in September 2011. he was also paired with professional ballroom dancer Lacey Schwimmer.

During 2016, the actor played the role in the TV series American Horror Story: Roanoke (AHS) sharing the screen along with Kathy Bates, Sarah Paulson, Lily Rabe, and Denis O’Hare.

Bono has an estimated net worth of around $1 million according to the sources.

Also, read the affair, salary, the net worth, controversy, and the bio of Daniel Krauthammer, Shaun King, Nick Offerman

Tags : ‘Family Outing’ and a memoir ‘The End of Innocence' American Writer