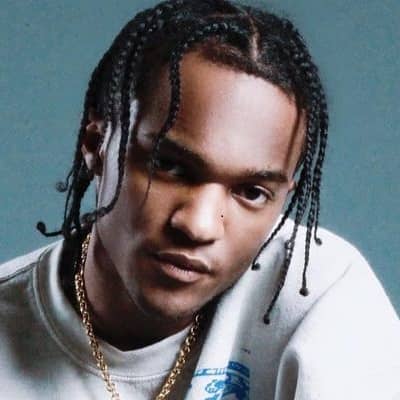 Chaz Marcus is currently taken. He is in a relationship with a mystery girl whose detailed information is unknown at present.

Also, he often uploads pictures of himself with his girlfriend on his respective social media sites. In further days, if he revealed anything regarding his love life then we will update it.

Who is Chaz Marcus?

Chaz Marcus is an American singer, songwriter, and rapper. He is best known for his work in the album, “Leak” collaborated with Brooklyn drill rapper Fivio Foreign.

Chaz was born on November 18, 1998, in the United States. She holds an American nationality and belongs of All-American descent.

Chaz’s mother’s name is Ty Whittington-Scott who is an award-winning screenwriter, director, and producer. Also, he has two sisters named Kidada Simone and Bria Fleming.

However, he hasn’t yet revealed his father’s details in the media. Also, his academics background is under the curtain at the moment.

Chaz’s genre is Hip Hop and Rap. On November 19, 2018, he released the album title The Chosen One through the A.A.E label. The album featured eight songs such as Intro, Bod Mon, Down, Face Watching, My Girl, and more.

Lately, he released his new album, I AM CHAZ MARCUS Vol. 1 on February 21, 2020, through AAE records. The album included the songs like Relations, It’s Good, Perfect, Leak, and more.

Similarly, he has released two singles to date that Balmain Belt and Drill Baby. He also owns merch where he sells printed hoodies, t-shirt, and so on.

To date, Marcus has not been part of any sorts of rumors and controversy that create headlines in the media. Also, he stays miles away from such controversial acts that could hamper his professional and personal life.

The exact figure of Marcus’s net worth, salary, and yearly income haven’t yet disclosed in the media. However, he might have earned an impressive amount of wealth throughout his career.

The singer stands at the height of 5 feet 7 inches tall. He has a curly black hair color with black pair of eyes as well. Further, his other body measurement is not available including his weight.

He has a verified Spotify account where he garnered more than 40k monthly listeners. Furthermore, he has a self-titled YouTube channel with over 2.16k subscribers.