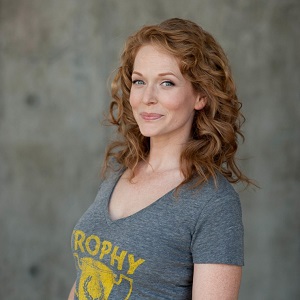 Chelah Horsdal has kept her personal life private and out of the spotlight. She usually doesn’t talk about her private life in media and public. She prefers people focusing on her work rather than her personal life.

She hasn’t mentioned about her affairs publically and has managed to keep it low profile. There is no any record of her marriage and divorce till now. She has not clarified about her married life, affair, boyfriend and spouse till the present time. She is currently focusing on her work and it seems like she doesn’t have time for love affairs. According to the records, she is possibly single at the present time.

Chelah Horsdal is a Canadian actress a social media personality who is immensely popular for her works. She is famous and her best roles are in the TV series’ Hell on Wheels, When Calls the Heart, and recurring roles Stargate SG-1, Level Up, Arrow, and for her roles in the films Aliens vs. Predator: Requiem and Rise of the Planet of the Apes.

Chelah Horsdal was born on June 19, 1973, in Vancouver, British Columbia. Her nationality is Canadian and ethnicity is North American.

She had attended  Bayview Elementary followed by Lord Byng Secondary. When she was 18 years old she had begun modeling in locally shot TV shows and commercials.

The young and praising actress Miss. Chelah Horsdal had started her career in 2002. From 2002 she had appeared in 75 commercials as well as in films and on television. She had played leading and supporting roles on Hell On Wheels, Man In The High Castle, When Calls The Heart, Candyland, Patterson’s Wager, “Three Weeks, Three Kids” “On Strike For Christmas,” “Marley & Me; The Puppy Years.” and Lifetime’s The Client List. She had lead roles in Lying To Be Perfect and Mrs. Miracle.

In 2006 and in 2010 she had earned  Leo nominations for Best Performance from the short movie Dark Room and “The Hostage”. She had also recurring roles like the critically acclaimed Battlestar Galactica, Exes & Ohs, The L Word, Stargate: SG1, Saved, DaVinci’s Inquest, Whistler, Blackstone, Clue, and Cartoon Network’s Level Up. In 2011, she was nominated for the best actress in the movie “The Hostage”. And the same year she had played the leading role in the CBC pilot “Wishing Well”.

There is no information on Chelah’s salary and net worth.

Currently, there no drastic rumors regarding Chelah Horsdal’s personal and professional life. It seems like she is doing the best job without harming others for which he hasn’t been a part of controversy yet.

Chelah Horsdal has a height of 5 feet 9 inches. Her body weighs 57kg. She has golden-brown hair and blue eyes. Her body measurements are 34-25-34 inches. Besides these, her bra size is 34B.