Updated On December 18, 2022 | Published By: Selina shamp
Share this
Single 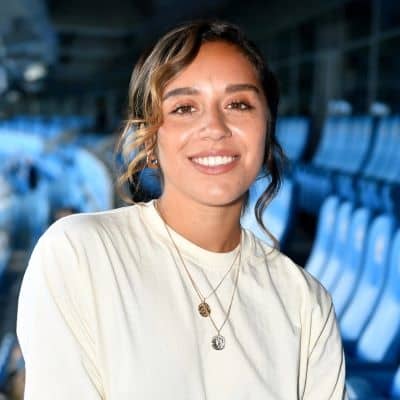 Chelcee Grimes is possibly single as of 2022.

Previously, Grimes is dating the former Love Island star, 25, Megan Barton-Hanson. The couple shared a passionate kiss at a swing in the luxury Heritance Aarah resort in Jan 2020.

Who is Chelcee Grimes?

Chelcee Grimes is an English singer, songwriter, television presenter, and footballer who is participating in the upcoming reality competition series Freeze the Fear with Wim Hof.

Her journey as a singer, TV presenter, and songwriter as a whole is embarking excellency.

How old is Chelcee Grimes?

She was born on 8 May 1992 with the birth name Chelcee Maria Grimes in Aigburth, Liverpool. The 30-year-old singer has Taurus Zodiac, American ethnicity, and holds American nationality.

Introducing the parents, her mother is Maria while her father’s identity is concealed as he had an untimely demise from a heart attack.

She grew up with her foster father David after losing her father at a young age. She also has a half-sister with 16 years of the age gap.

At first, she enrolled in St Julie’s Catholic High School where she developed an interest in football and music. Eventually, Chelcee played for Liverpool Ladies but later made her mindset to pursue a music career at the age of 16.

Meanwhile, she joined as a footballer in Everton, Tottenham Hotspur, Tranmere Rovers, Fulham, and Merseyrail Ladies.

To begin with, Grimes worked as a presenter for the BBC and COPA90. Meanwhile, she covered the 2019 FIFA Women’s World Cup.

Likewise, Grimes has hosted her own show on BBC Sport titled Chelcee Away. She has been the co-presenter of the Match of the Day spin-off show, MOTDx on BBC Two since September 2019.

Most recently, she was the commentator on the semi-final of the UK Eurovision Song Contest 2021. She was the presenter of several mini-series for BT Sport including Para Football Adventures, and Watch Us Rise in July 2021.

Since Dua Lipa secured her first recording contract, Grimes has co-written many songs for her, including “Kiss and Makeup” (2018) and “Love Again” (2021).

How much is the net worth of Chelcee Grimes?

The estimated net worth of singer Chelcee is $1.5 million, which she garnered from her successful music career. Meanwhile, the wiki of her salary, luxuries, cars, and brands are under update.

In a 2019 interview with Gay Times, Grimes identified herself as bisexual, but by 2021, she regarded herself to be a lesbian.

The detail regarding her weight, chest-waist-hip size, bicep, dress, and shoe size are under update.

Is he active on any social media sites?

Chelcee is available on Instagram with the username @chelceegrimes with 193 posts and 92.6k followers. She also has 30.5k followers on Twitter @ChelceeGrimes and has a 6k fan following on the Facebook page as of 2022.