Rose to fame after appearing in the prominent role of Norah in Netflix's teen series "Ginny & Georgia". 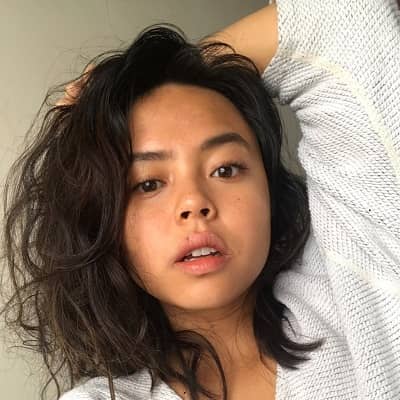 Chelsea Clark is currently more focused on her career rather than being in a romantic relationship. She hasn’t yet introduced anyone as her boyfriend or lover.

Thus, she is possibly single. In further days, if she revealed anything regarding her love life then we will definitely update it.

Who is Chelsea Clark?

Chelsea Clark is a Canadian television actress and voiceover artist. She rose to fame after appearing in the prominent role of Norah in Netflix’s teen series “Ginny & Georgia”. The actress is also best known for her character in the Canadian series, Degrassi: Next Class.

Chelsea was born in Toronto, Canada on May 5, 1998. She holds Canadian nationality and belongs to biracial ethnicity where her father is of Caucasian descent and her mother is of Asian.

She has a younger sister named Gillian Clark who is a dancer. However, she hasn’t yet disclosed her parent’s identity in the media.

Moving towards Clark’s academics, she graduated in July 2016 from Cardinal Carter Academy For The Arts.

Chelsea made her first role as Dhara in 2010 on a season one episode of the ABC/Global hit show Rookie Blue. A year after she made an appearance in Life with Boys where she portrayed the role of Stacey.

Similarly, between the year she has appeared in various shorts films like Resolve, The Overture, Blue Heart Emoji, Greta Follows Rivers, and more. Afterward, she got a prominent role in the year 2016 as Esme Song in the Netflix original series titled, Degrassi: Next Class.

Likewise, she is starring in another Netflix series, Ginny & Georgis as Norah along with Katie Douglas, Sara Waisglass, Brianne Howey, Mason Temple, Antonia Gentry, and other cast members. The series premiered on February 24, 2021, on Netflix.

Furthermore, she has been part of various television commercials including a Government of Ontario sponsored commercial against sexual violence tagged #WhoWillYouHelp.

To date, Clark has not been part of any sorts of rumors and scandals that create headlines in the media. Also, she stays miles away from such controversial acts and disputes that could hamper her uprising career and personal life.

Clark is one of the most promising actresses in the television industry who might have earned a handsome amount of wealth throughout her acting career. But she hasn’t yet revealed her actual figure of net worth, salary, and yearly income in the media.

The actress is 5 feet 4 inches tall and her weight is around 55 kg. She has a mole on her upper lip. Further, she has beautiful brown pair of eyes with brown hair color.

Likely, she has a verified Instagram account where she has over 365k followers. She has more than 1.3k followers and over 1.2k likes on her Facebook page.