Chelsea Clinton is a married woman. She is married to investment banker Marc Mezvinsky. The pair married on July 31, 2010, and the wedding took place in an interfaith ceremony in Rhinebeck, New York. 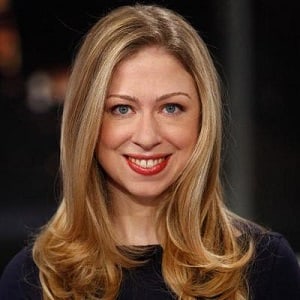 I'm a big health-food freak and a vegetarian devotee.

We've got to realize we are the future and we make of our future what we make of it, and ultimately we have to do it for ourselves.

Determination gets you a long way.

Who is Chelsea Clinton?

Chelsea Clinton is the only child of former U.S. President Bill Clinton and former U.S. Secretary of State Hillary Clinton.

Additionally, she also worked as a special correspondent for NBC News from 2011 to 2014. At present, she works with the Clinton Foundation and Clinton Global Initiative.

Chelsea Clinton became interested in the world of politics at an early age and accompanied her parents as they campaigned throughout Arkansas when she was just two years old. Additionally, she began taking dance classes in Arkansas at age four.

Chelsea Clinton also earned master’s degrees from Columbia University’s Mailman School of Public Health and University College, Oxford. Furthermore, she earned a Doctor of Philosophy in international relations from the University of Oxford.

In 2003, Clinton joined the consulting firm McKinsey & Company. Later, she also worked for Avenue Capital Group. Eventually, she was appointed the Vice-Chair of the Clinton Foundation.

NBC hired Clinton in November 2011 as a special correspondent. She left the network in August 2014. She campaigned for both of Hillary Clinton’s presidential campaigns.

Clinton has a significant role in the Bill, Hillary & Chelsea Clinton Foundation. In addition, she was also named to the Board of Directors of Expedia Group in March 2017.

Apart from her work in politics, she has also published books including ‘She Persisted’ and ‘It’s Your World: Get Informed, Get Inspired and Get Going!’.

Despite several criticisms, Clinton received the Lifetime Achievement Award. Additionally, she also received the Glamour Award for Woman of the Year in 2014.

Chelsea Clinton has not revealed her current salary. However, she has an estimated net worth of around $ 15 million at present (2022).

Clinton became part of several controversies after she received some negative critical reviews for her work on NBC.

Additionally, she also became part of another controversy after there were rumors that the Clinton Foundation illegally paid for Chelsea Clinton’s 2010 wedding.

Furthermore, she was also at the center of another controversy after she wished Happy New Year to the Church of Satan in 2018. At present, there are no rumors concerning Clinton and her career.

Talking about her body measurement, Clinton has a height of 5 feet 9 inches (1.75 m). Additionally, she weighs around 67 kg.