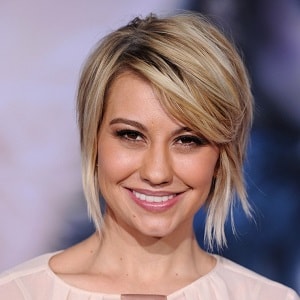 [on changing her last name from Staub to Kane] “No. I did not get married. Yes, Kane is my middle name. And, I lost my verification when I changed my name, but working to get it back. Why? People struggled with pronouncing and spelling 'Staub.' Got tired of 'Stab' and 'Stub,' so "Chelsea Kane" makes life simpler. I know it's a little strange to get used to, but thanks for making the best of it until we all get comfortable with it!”

What is the relationship of Chelsea Kane?

The charming actress, Chelsea Kane has a long dating history.

In the year 2008, she was spotted with Joe Jonas, she dated actor Steven R. McQueen soon after the relationship ended Joe.

After McQueen, in January 2009, she was spotted with singer Jake Johnson. Similarly, she dated Brian Dales and Stephen Colletti.

She also dated Derek Theler, her co-actor from the movie Baby Daddy. But the relationship couldn’t go well as Drake cheated on her.

Since 2015, she is dating another co-actor from the movie ‘Baby Daddy’ Peter Porte. They have been enjoying their relationship since then.

Who is Chelsea Kane?

Chelsea Kane whose original name is Chelsea Kane Staub and nickname Chels is an American actress and singer.

She is famous for her role as Stella Malone in the Disney Channel television series ‘Jonas’ and the role of Riley Perrin in the Freeform sitcom, Baby Daddy.

‘Her father once worked as a trapeze artist, and her mother is a former flamenco dancer.

She was born and raised in her early half-life in Phoenix. She is the only child of her parents and does not have any siblings. Her ethnicity is mixed(German, Irish, English) and her nationality is American.

She did her schooling at Saguaro High School, in Scottsdale, AZ before moving to L.A. She is also a member of the Valley Youth Theater.

Chelsea Kane debuted her professional acting in a short film titled ‘Failure of Pamela Salt’ in 2001.

She acted as a guest star in the television series ‘Cracking Up, Listen Up!’ and the direct-to-video film ‘Arizona Summer’ in 2004.

She played an antagonist in the film ‘Bratz’ in 2007 and she starred in the movie ‘Minutemen as Stephanie Jameson in 2008.

She showed her acting performance in one of the episodes of ‘Wizards of Waverly Place and the film ‘Starstruck’ in 2010.

In the series ‘Jonas’, she played the role of Stella Malone from 2009 to 2010. Kane co-starred as Bea Goldfishberg in the Disney Channel animated series ‘Fish Hooks’.

Chelsea joined the cast of the final season of ‘The CW’s One Tree Hill’ in a recurring role in 2012.

She performed the role of Tara, who is a love interest for Kane’s real-life ex-boyfriend Stephen Colletti’s character, Chase.

She has been co-starred as Riley Perrin in the ABC Family sitcom ‘Baby Daddy’ until the end of its run in 2017 since 2012.

Chelsea Kane: Net Worth and Salary

It is estimated that she has a net worth of around $4 million and her main source of earnings is from her film and her music albums.

Since she loves to keep her information inside herself, she has not been involved in any rumors and controversies.

Chelsea Kane has a height of 5 ft 6 inches and she weighs 54 kg.

To know more about the early life, family, net worth, awards, profession, social media, and body measurement of Sean Astin, Lady Gaga, and Sharon Osbourne, please click on the link.