Chelsea Peretti is an actress, comedian, and writer. 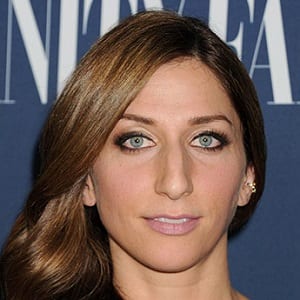 When I was little, people would ask what my favorite color was, and I never knew. I find it's really hard to make decisive 'best' answers on what the 'best' of something is.

I barely watch TV. Somehow, I make it work with just the Internet. On TV, there's always so much crap, and you have to flip around.

I think that with podcasts, a lot of things are about fostering and having a direct connection with the community.

I would say that I have a love-hate relationship with almost everything in my life, including stand-up.

I'm Jewish and Italian, and I lucked out and got the nose of both cultures.

What is the relationship of Chelsea Peretti?

Chelsea Peretti is a married woman. She is married to actor, comedian, and filmmaker Jordan Peele. The pair began dating in March 2013 and later engaged in November 2015. They later married in April 2016.

The couple has a son named Beaumont Gino Peele from this relationship. The marriage is going strong as there is no news regarding any extramarital affairs at present.

Who is Chelsea Peretti?

Chelsea Peretti is an American actress, comedian, and writer. People mostly recognize her for her role as Gina Linetti in the police comedy series ‘Brooklyn Nine-Nine’.

Additionally, she also wrote two episodes of ‘Parks and Recreation.

Peretti was born in Contra Costa County, California on February 20, 1978. Additionally, she has two brothers and a sister. Her older brother Jonah Peretti is the co-founder of BuzzFeed and The Huffington Post.

She became interested in the world of comedy in her childhood years. She is of American nationality. Furthermore, she belongs to a mixed ethnic background of Italian, English, and Ashkenazi Jewish.

Talking about her education, Peretti attended The College Preparatory School. In addition, she also attended Barnard College and graduated in 2000.

Peretti initially appeared in the TV series ‘Comedy Lab’ in 2004. In 2006, she played Shonda in another TV series ‘Cheap Seats: Without Ron Parker’. Additionally, she appeared in ‘Twisted Fortune’ as Rachel the Saucy SalesWoman.

In 2009, she played Chelsea in ‘UCB Comedy Originals’. In one episode of ‘The Sarah Silverman Program.’ She played Becky. She has also appeared in ‘Louie’ and ‘Guy Talk’. Since then, she has appeared in numerous other movies and television series. All in all, she has over 25 credits as an actress.

Peretti has not revealed her current salary. However, she has an estimated net worth of around $3 million at present.

Peretti became part of a controversy after she went on a Twitter rant in 2017 during her pregnancy.  At present, there are no rumors concerning her life and career.

Talking about her body measurement, Peretti has a height of 5 feet 6 inches (1.68 m). Additionally, she weighs around 55kg.

She has a measurement of 34-26-35 inches. Furthermore, her hair color is dark brown and her eye color is blue.

Peretti is active on social media. She has a huge number of followers on social networking sites such as Instagram, and Twitter.