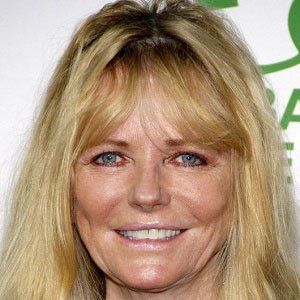 I will not remarry. I'm so grateful for the marriages that I have had. I wouldn't be who I am today if I hadn't had those. I've had four amazing men in my life, very strong, powerful, wonderful men. I certainly will have a relationship with someone but I don't think I will get married again.

Being in the public eye, I have certainly gone through the tabloid situation where they come out with stories that are not true. I don't read or pay attention to it. The only thing that I can do is know that I have great confidence in raising children and being a great mother.

Cheryl Tiegs has married four times. Similarly, she has mentioned many men as her affair, boyfriend, and spouse. She married Stan Dragoti an advertising executive in 1970 and divorced in the year 1979.

Lastly, she married Rod Stryker who is a yoga instructor in 1998 and divorced in 2001. Talking about her children she had a son Zackary with Anthony Peck and twins Theo and Jaden delivered via surrogacy with Ros Stryker.

Who is Cheryl Tiegs?

The American model and fashion designer, Cheryl Tiegs is famous as the first American supermodel. Similarly, she is famous for appearing many times on the Sports Illustrated Swimsuit Issue and TIME.

Likewise, her Pink Bikini poster became an iconic image of 1970s pop culture in the year 1978.

Cheryl Tiegs was born on 25th September 1947 in Breckenridge, Minnesota, U.S. She is the daughter of Phyllis and Theodore Tiegs. Her parents were an auto-assembly lineman turned funeral director.

Her family moved to Alhambra, California, in 1952. Similarly, her nationality is American whereas her ethnicity is unknown.

Talking about her education, she attended Alhambra High School. She posed for a swimsuit ad for a bathing suit manufacturer Cole of California; the ad which appeared in Seventeen.

Likewise, she enrolled as an English major at California State University, Los Angeles. But she left college before her junior year to pursue her career.

The American supermodel, Cheryl Tiegs started her career when she was 17. After that, the editorial staff at Glamour saw Cole’s bathing suit ad. She was booked on a shoot in Saint Thomas with Ali MacGraw which resulted in her first Glamour cover. In the same year, she made the covers of Seventeen and Elle.

Likewise, she subsequently appeared on the covers of Vogue and Harper’s Bazaar, among others. She was the first model who appeared twice on the cover of the Sports Illustrated Swimsuit Issue.

Talking about the covers she did, she made the cover of People four times, cover for TIME three times, and All-American Model cover story in 1978. Similarly, she signed the $1.5 million two-year contract with Cover Girl cosmetics which was recorded as the biggest contract ever.

In the year 1980, she launched her signature line of clothing and accessories for Sears. Her collection neared $1 billion in sales by 1989. Furthermore, she is active in the philanthropic community. She serves on the Board of Directors of C.O.A.C.H. for Kids and the Earth Conservation Corps.

In the year 2012, she was the contestant on Celebrity Apprentice which benefitted the Farrah Fawcett Foundation. Similarly, she has appeared on NBC’s Just Shoot Me and Oxygen’s Girls Behaving Badly. Likewise, as a recurring role, she portrayed herself on Family Guy. Likewise, she hosted a 13 part travel adventure series Pathfinders: Exotic Journeys.

Some other shows she appeared on including True Beauty, The Oprah Winfrey Show, The Today Show, Access Hollywood, Extra and many others. Her film credit is Vincent Gallo’s The Brown Bunny and Walk Hard: The Dewey Cox Story.

Cheryl Tiegs has not received any awards and nominations yet. She was included on People’s 2008 50 Most Beautiful People list. Also, she was featured on the 100 Hottest Women of All Time.

The net worth of the American model, Cheryl Tiegs is around $24 million dollars. After starting her career at the age of seventeen, she might have earned a huge amount of money. There is no information about her salary.

Similarly, her house in Bel Air, California placed on the market in May 2015 for $15 million.

On the Sports Illustrated’s first plus-size swimsuit issue cover model, Cheryl said that she thinks that the acceptance of full-figured women sends a bad message. She referenced to the plus-size model Ashley Graham’s appearance on one of three 2016 SI Swimsuit Issue covers.

Know about little child model and actress Brooke Nicole Morris relations with her mother! And her career!