Cheslie Kryst is an American television presenter and beauty pageant titleholder. She was crowned Miss USA 2019. 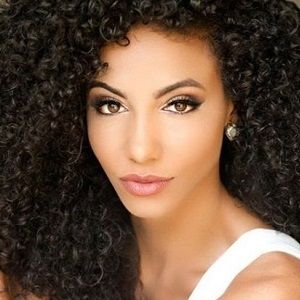 I was inspired to compete in pageants by my mom, April Simp­kins, who was Mrs. North Carolina US 2002. I remember watching her win and going to appearances with her during her reign. She was involved in countless events because of her title — parades, speaking engagements, and I can’t even remember how many times I heard her sing the national anthem. Her title provided her with a platform to advocate for issues that were important to her and people listened.

Cheslie Kryst is not married and it seems like she is possibly single. She has not shared her love life on media. There is no information about her dating anyone in the past as well.

It seems like she is busy on her career and winning pageants rather than her love life. Her fans are eager to know about her boyfriend and affair.

Who is Cheslie Kryst?

Cheslie Kryst is an American Pageant titleholder. Cheslie Kryst was crowned Miss USA 2019. Similarly, she represented the United States at the Miss Universe in 2019.

She was crowned as Miss North Carolina USA 2019 and became the third woman to win Miss USA from North Carolina. She is also a Correspondent for Extra TV.

She was born on 28th April 1991 in Charlotte, North Carolina, U.S. She is the daughter of April Simpkins (mother) who is the former winner of Mrs. North Carolina US 2002 as well as Ms. Petite North Carolina Contest.

Her biological father’s detail is unknown. But she has a stepfather David Simpkins.

At present, she serves as a Fitness enthusiast and a musician. Similarly, she has five siblings including Asa Kryst, Chandler Kryst, Page Veronica, and Renee. She keeps sharing pictures with her family.

Further, her nationality is American and her ethnicity is mixed (African-American-Polish).

Likewise, she graduated from the Darla Moore School of Business with a degree in marketing and human resource management in 2013.

After the undergraduate degree, she enrolled in Wake Forest University School of Law. She graduated with a Juris Doctor and Master of Business Administration in 2017.

She became licensed to practice law in both North Carolina and South Carolina after graduation. Similarly, she began working as an attorney at Poyner Spruill LLP. She is also the founder of the fashion blog White Collar Glam. It is dedicated to helping women to dress professionally in white-collar jobs.

Cheslie began her pageantry career as a teenager. As she won the Miss Freshman at Northwestern High School in Rock Hill, South Carolina. Later she won Miss Fort Mill High School. Likewise, she made two attempts to win the Miss North Carolina title but she was placed in the top ten both times.

Likewise, she became the third woman from North Carolina to win Miss USA after Chelsea Cooley and Kristen Dalton. She became the oldest person to win the Miss USA title. Further, she will represent the United States at the Miss Universe 2019 competition.

There is no information about the net worth, salary, and income of her. She might earn a huge amount of money from her career.

This model has not been into any rumors and controversy.

Talking about Cheslie Kryst’s body measurements, she has a height of 5 feet 6 inches and weighs around 55 kg. Similarly, her body measurement is 35-24-36 and has a shoe size of 6 inches.

Her eye color is brown and she has black color hair.