Chevy Chase is an actor, comedian as well as a writer. 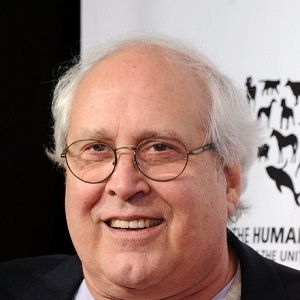 I'm Chevy Chase, and you're not.

Parrots make great pets. They have more personality than goldfish

All my children inherited perfect pitch.

Chevy Chase and Jayni Chase are the parents of four children

Moving towards the personal life of Chevy Chase, he is a married man. 78 years old, Chevy tied the knot with Jayni Chase in 1982.

Earlier, he had married Jacqueline Carlin in 1976–1980 and Suzanne Chase in 1973–1976. They had separated due to differences in their relationships.

Who is Chevy Chase?

Chevy Chase is an actor, comedian as well as a writer. He had become a member in the first season of Saturday Night Live, where his recurring Weekend Update segment soon became a staple of the show.

From 2009-2014, he acted as Pierce Hawthorne in the NBC comedy series Community.

His birth name is Cornelius Crane “Chevy” Chase and belongs to the American nationality. He belongs to mixed ethnicity (English, Scottish, Irish, Danish, Dutch, and German).

He is the son of father Edward Tinsley “Ned” Chase and mother Cathalene Parker.

His father was a famous Manhattan book editor and magazine writer whereas his mother was a concert pianist and librettist.

His mother was the daughter of Admiral Miles Browning, most notable for serving as Rear Admiral Raymond A.

He had studied at Riverdale Country School. Then he graduated from the Stockbridge School.

For further studies, he attended Haverford College. He had taken transferred to Bard College in Annandale-on-Hudson, New York, where he studied a pre-med curriculum and graduated in 1967 with a Bachelor of Arts in English.

Furthermore, he played drums in the college band, The Leather Canary.

Starting his career, he had begun as a member of an early underground comedy ensemble called Channel One which he co-founded in 1967.

In 1973, he made the move to comedy as a full-time career, when he became a cast member of The National Lampoon Radio Hour, a syndicated satirical radio series.

Subsequently, in 1975, he had become one of the original cast members of Saturday Night Live (SNL), NBC’s late-night comedy television show.

He had performed in other skits on SNL including a recurring role as the Land Shark in the movie Jaws. Then he committed contractually to SNL for only one year as a writer.

In 2015, he received two Emmy Awards and a Golden Globe Award for his writing and live comic acting. He had become the first member of the original cast to leave the show in 1996. In 1980, he escaped from death by electrocution during the rehearsal of Modern Problems.

He even earned around US$7 million per film and was a highly visible celebrity. In 1986, he appeared alongside Paul Simon, one of his best friends, in Simon’s second video for “You Can Call Me Al”.

Likewise, in 2002, he was roasted by the New York Friars Club for a Comedy Central television special. In 2006, he was guest-starred as an anti-Semitic murder suspect in “In Vino Veritas.

Through his hard work in his professional life, he has earned a net worth of $50 million as of 2022. He has won two Emmy Awards and a Golden Globe Award for his comedy writing and lives comic acting on the show.

He had dropped the N-word on the set of the NBC comedy Friday afternoon in the presence of his co-stars Yvette Nicole Brown and Donald Glover which turned into a controversy.

Moving towards his body measurements, he has a height of 6 feet 4 inches and weighs 96 kg. His hair color is grey with dark brown eyes. His shoe size is 11(US).