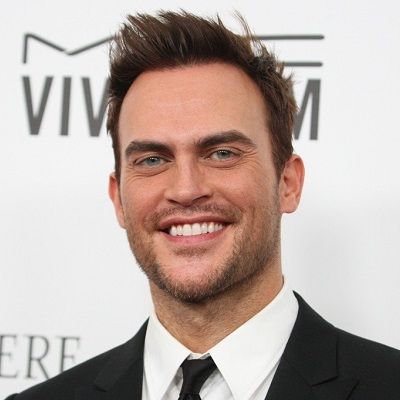 To be frank, I think I've missed out on big parts because I'm open. I've screen-tested on some really big projects, and you can't tell me that behind closed doors big execs aren't like, "We have Dean Cain or this gay guy who played Elvis on Broadway". I'm not that naive to think that that doesn't play into it.

On the set of United 93 (2006) we spent so many hours bleeding, screaming, crying, praying, and trying to imagine every possibility of what these people were going through. It was an environment of deep dark places. But, at the end of the day the we could wash off our makeup and come out of those places.

Cheyenne Jackson is happily married to his boyfriend Jason Landau. Jackson is openly gay. Jason is also an actor. They got engaged in February 2014. Similarly, they married on 13th September 2014.

Jackson and Landau are parents to twins Evan and Willow born on 7th October 2016. The family of four is living happily together.

Jackson was previously married to Monte Lapka. They walked down the aisle on 3rd September 2011. Monte is a physicist. They started dating in 2000.

Jackson and Lapka ended their 13 years of relationship in July 2013. They filed for divorce in September 2013.

Who is Cheyenne Jackson?

Cheyenne Jackson is an American actor and singer known for his leading roles in Broadway musicals. Jackson has also done in stage roles, TV and film roles.

He is the son of David Jackson and Sherri Jackson. Similarly, he has three siblings, two brothers and a sister with whom they were raised in Oldtown, Idaho. His father David was a Native American and a Vietnam veteran.

Similarly, his mother coached him and his siblings to sing and play music. Jackson has not disclosed about his education.

When he moved to Seattle, Jackson worked as an ad executive at a magazine and he did theater work on the side.

Cheyenne appeared as Tony in West Side Story. He has appeared in a number of Theater works which include The Most Happy Fella, Children of Eden, Carousel, Damn Yankees, The Rocky Horror Show, and others.

He played the lead role of Sonny on Broadway in Xanadu which earned his nomination from the Drama League and Drama Desk for Outstanding Lead Actor.

His most recent theater work is in The Most Happy Fella as Joe in 2014, The Secret Garden as Dr. Nevill Craven in 2016 and Into the Woods as Cindrella’s Price/Wolf in 2019.

His recent appearance was in American Woman, Will & Grace, American Horror Story: Apocalypse, Descendants 3, The Morning Show, and Watchmen.

In the year 2005, he played the role of Luke in Curiosity. After that, he appeared as Mark Bingham in United 93.

His other film roles include in Hysteria, The Green, Price Check, Lola Versus, Mutual Friends, Six Dance Lessons in Six Weeks, Love Is Strange, A Beautiful Now, Day Out of Days, Hello Again, Hurricane Bianca 2: From Russia with hate, and Werewolves Within.

In 2009, he released his album The Power of Two. After that, he released I’m Blue, Skies and Renaissance. Jackson’s singles and music videos are Drive, Before You, Don’t Wanna Know, Find the Best of Me, and She’s Pretty, She Lies.

Jackson is openly gay and is a supporter of LGBT rights. Similarly, he is the international ambassador of amfAR.

He is also the national ambassador of the Hetrick-Martin Institute.

Cheyenne sold his Hollywood Hills West home for $2.035 million. Similarly, he bought another house in the same area for $3.55 million.

Jackson was part of the 2014 movie Love is Strange which made earnings of $2.2 million. Likewise, United 93 made a collection of $76.3 million.

Back in 2013, he was everyone’s radar as his second sex tape was released. He was clearly visible in the tape. He sparked controversy for his alleged sex tape.

Jackson has dark brown hair and blue eyes. He is 6 feet 4 inches tall and weighs around 102 kg.