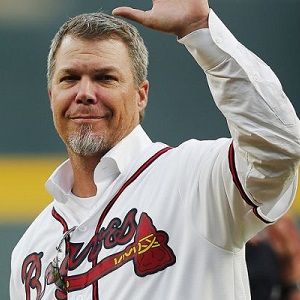 Chipper Jones is a married man. He married three different women. At first, he married Karin Fulford. They married in 1992 and divorced in 2000. Their divorce occurred due to his 18-month extramarital affair with a Hooters waitress that produced a son, Matthew, born in 1998.

At Second he married Sharon Logonov in March 2000 in Pierson, Florida. Similarly, they had three sons Larry Wayne III(Trey), Tristen, and Shea. On November 2012, they separated.  After that, he started dating the former Playboy model Taylor Higgins. They married on 14th June 2015.

Likewise, their son, Cutler Ridge Jones was born on January 11, 2017, in Atlanta. Further, their second son, Cooper was born on August 9, 2018. They are still married and live together.

Who is Chipper Jones?

Chipper Jones is an American former Major League Baseball (MLB) player who was the Atlanta Braves’ number one overall pick in the 1990 MLB draft. Similarly, he was their primary third baseman from 1995 to 2012. He was the winner of the 1999 National League (NL) Most Valuable Player Award and the 1999 and 2000 NL Silver Slugger Award for third basemen.

He was born on 24th April 1972 in DeLand, Florida. Similarly, he was the son of Larry Wayne Jones, Sr. and Lynne Jones. His father was a teacher and coach at T. DeWitt Taylor High School in Pierson, the same high school Jones would later attend and play baseball.

Likewise, he belongs to American nationality and his ethnicity is mixed (English, Irish).

Talking about his education, he attended T. Dewitt Taylor High School in Pierson. Similarly, his father was a teacher and the coach at the same school. Likewise, he graduated from college at Bolles School, Jacksonville, Florida, where he played for three seasons and won a state double-A championship with his team.

He was the Atlanta Braves’ number one overall pick in the 1990 MLB draft and their primary third baseman from the year 1995 to 2012. But he ended his career in 2012 with a .303 career batting average, 468 home runs, and 1,623 RBI. Similarly, he has the most career RBI for a third baseman and holds the Braves team record for career on-base percentage (.402). He ranks third on the Braves career home run list.

Similarly, Chipper Jones spent his entire 19-year MLB career and all 23 years as a professional baseball player in the Atlanta organization. Among switch hitters, he ranks second behind Eddie Murray for career RBI. Likewise, he is the only switch hitter in MLB history with a career batting average of at least .300 and 400 or more home runs.

Moreover, he was the 18th player in MLB history to accumulate 5,000 at-bats and finish with at least a .300 batting average, .400 on-base percentage, and .500 slugging percentage—and the only switch hitter to reach all of these milestones. Further, on June 28, 2013, the Braves retired Jones’ number 10 and inducted him into the team’s Hall of Fame. Likewise, on July 29, 2018, he was inducted into the National Baseball Hall of Fame in his first year of eligibility.

He won the 1999 National League (NL) Most Valuable Player Award and the 1999 and 2000 NL Silver Slugger Award for third basemen. Similarly, he was the MLB batting champion in 2008 after hitting 364.

The raised salary of Chipper Jones is around $13 million. His current net worth is reported around $110 million which doesn’t show any significant increase or decrease since 2012. Similarly, he is also one of the highest earnings MLB players with the career earnings of $168,552,133.

It was was also the last contract of his career.

There is no any big rumors and controversy about Chipper. He is successful in maintaining his life free from rumor.

Chipper Jones has a height of 6 feet 3 inches and weighs around 95 kg. Similarly, his hair color is salt and pepper and he has blue color eyes. There is no information about his other body measurements.