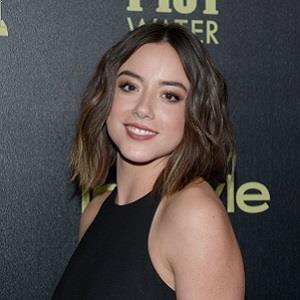 Hopefully, sometime I get a superpower. I would like to be able to transport myself wherever I wanted.

I think it was hard for people to cast me as an ethnic, as an Asian American woman.

For basically two years, I took acting classes and found my own stride in L.A.

What is the relationship of Chloe Bennet?

Chloe Bennet has been in a number of relationships in her life. She is unmarried now.

During her early career days, she dated dancer Val Chmerkovskiy. After that, she dated Tony Oller in 2012. She also dated British actor Sam Palladio in 2012.

After that, he began dating famous American actor Austin Nichols in 2013. After four years of their affair, the couple broke up in early July of 2017.

After their breakup, she was seen with famous American social media star Logan Paul. She has not clarified her relationship with Logan.

Who is Chloe Bennet?

Chloe Bennet is an American actress and singer. She is best known for her role as Daisy Johnson in the ABC spy-fi series Marvel’s Agents of S.H.I.E.L.D. (2013-present). She is also famous for playing a recurring supporting role in the ABC drama series Nashville as Hailey (2012–13).

Talking about her early life, Chloe Bennet was born on 18 April 1992, in Chicago, Illinois, USA. Her birth name is Chloe Wang. She is the daughter of a Chinese-American father, Bennet Wang and European-American mother, Stephanie Wang.

Her mother is an internist and her father is an investment banker. She has six brothers. She spent her childhood with her siblings and parents. Her nationality is American and is of the mixed ethnicity of Chinese, English, Scottish, Irish, Swiss-German, and German ethnicity.

Chloe attended St. Ignatius College Prep for high school in Chicago, Illinois. At the age of 15, she moved to China to her career as a singer, under the name Chloe Wang. While she was in China, she lived with her Shanghaies paternal grandmother in Shanghai. At that time, she studied Mandarin.

Chloe began her career as a singer while she was in China. In 2011, she appeared in a music video for South Korean band BIGBANG’s extended play musical recording, Tonight. In 2011, she released three singles titled “Uh Oh” in English and Chinese version, and “Every Day in Between“.

She made her TV debut as a host for the short-lived TeenNick summer dance series The Nightlife. In 2012, she had a small role in the TV film Intercept. She got her first big break as Hailey in the TV series Nashville (2012-13). The following year, she appeared in a short film titled Nostradamus.

She will be playing the character Karen in the upcoming movie Valley Girl (2018). Bennet has a net worth of 3 million dollars as of 2022.

Is Chloe Bennet involved in any rumors and controversies?

Rumors are that Chloe is currently dating social media star Logan Paul as she was seen kissing him in public.

Recently, there was the controversy that Bennet Speaks Out Against Gigi Hadid and Steve Harvey for making ignorant Asian jokes about her. She said that people make fun of her for being Chinese and for having small Asian eyes. Later, she posted on her Instagram saying that she wasn’t sensitive about the joke.

What are the body measurements of Chloe Bennet?

Did Logan Paul Confirmed His Relationship? Explains His Friendship In The New Video With Chloe Bennet After They Were Spotted Kissing In Hawaii During Their Vacation