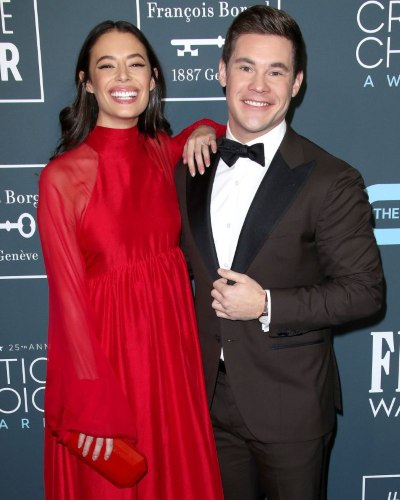 Chloe Bridges and Adam Devine are married! The couple walked down the aisle over the weekend after two years of engagement. They are officially husband and wife. Their wedding was held in Cabo San Lucas, Mexico. She wrote,

“Were we crazy for trying to plan a wedding during a global pandemic?? Probably, yeah, cause many, many things went wrong including but not limited to us both getting breakthrough covid. But we gave it our best shot and it’s almost here and it seems like it’s actually going to pan out!!”

The beautiful bride showed off her gown. Likewise, their close friends traveled to witness their wedding ceremony. Everyone congratulated the couple. Chloe wrote,

“Consider this dump of the wedding dresses I almost-chose-but-didn’t to be your warning that this is going to be a very wedding-heavy account for the next two weeks.”

The couple first met each other in 2014 on the set of The Final Girls. Likewise, the pair engaged in October 2019 after four years of dating. Their relationship has been going well and is happily married to each other.

Chloe is an American actress and singer. Likewise, she is famous for her role as Zoey Moreno in the sitcom Freddie from 2005 to 2006.

She is also well recognized for her role as Dana Turner in the Disney Channel film Camp Rock 2: The Final Jam in 2010. Read more bio…

All about the relationship of Celesta Deastis and Calum Worthy!
Tags : Actress Singer