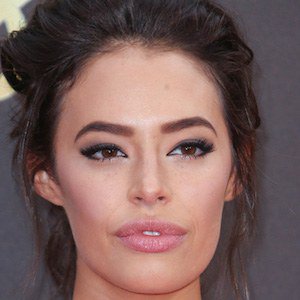 “I have this prominent feature on my face - I don't know if you've noticed - but, well, they're my lips. They tend to walk into a room before I do because they're larger than average! So Chapstick's a big one for me.”

Chloe Bridges is currently in a relationship with Adam Devine who is an actor, comedian, screenwriter, producer, and singer. The duo met for the first time on the set of ‘The Final Girls’ in which both of them played supporting roles and they began dating ever since.

The couple is seen together at premieres and they also took a trip to Disneyland together in 2015 and the duo is often seen sitting courtside at a Los Angeles Clippers game.

The couple seems to be loving and caring for each other and are now engaged. They exchanged rings in Oct 2019.

Who is Chloe Bridges?

Chloe Bridges is an American actress and singer. She is famous for her role as Zoey Moreno in the sitcom ‘Freddie’ from 2005 to 2006.

She is also well recognized for her role as Dana Turner in the Disney Channel film ‘Camp Rock 2: The Final Jam’ in 2010.

She was born on December 27, 1991, in Thibodaux, Louisiana, USA. Her birth name is Chloe Suzao and she is currently 28 years old.

She has not disclosed the names of her parents but it is known that her father is from the Republic of Honduras while her mother is English.

Chloe holds American citizenship and her ethnicity is a mix of Honduran and English.

She joined John Muir Middle School in Burbank, Southern California. She was a nerd in school and won the Student of the Month Award in 2005.

Then, she attended Columbia University’s School of General Studies in 2014. In the meantime, she has been cast in the television series ‘Pretty Little Liars.

Chloe Bridges began performing professionally in 2005 after she portrayed the role of Zoey Moreno in the ABC sitcom ‘Freddie’ and for her role in the sitcom, she was credited under her birth name, Chloe Suzan.

She portrayed the character from 2005 to 2006 and she guest-starred as the same character in an episode of ‘George Lopez’ in 2006.

She auditioned for the role of Mitchie Torress in the film ‘Camp Rock’ but the role went to Demi Lovato. Then, she portrayed the role of Dana Turner in the sequel ‘Camp Rock 2: The Final Jam’ in 2010.

Also, Chloe was cast as Donna La Donna in the CW’s ‘Sex and the City’ prequel which was titled ‘The Carrie Diaries.

She portrayed the recurring role of Sydney Driscoll in the fifth season of the ABC family in the series ‘Pretty Little Liars’ in April 2014 and played the supporting character of Paula in the horror film ‘The Final Girls’ in 2015.

She appeared as Kibby in the drama series ‘Daytime Divas’ on June 5, 2017, and portrayed the recurring role of Roxy Buckley in the American black-comedy television web series ‘Insatiable’ in 2018. Also, recently, she portrayed the role of Tessa in an episode of ‘Charmed’ in 2019.

She has an estimated net worth of around $2 million and she has earned that sum of money from her career.

Her current boyfriend, Adam DeVine said that he believed Chloe expected him to propose during their trip to Paris. Host Osher Gunsberg suggested he propose to her when they visit Australia.

Also, she was rumored to be kissing Logan Paul during his holiday in Hawaii in June 2017 but people mistook Chloe Bennet as Chloe Bridges.

Chloe Bridges has got a slim body with a height of 5 ft. 5 inches and a weight of 56 kg. Also, Chloe has got dark brown hair and dark brown eyes.

To know more about Andrea Bowen, Julie Bowen, and Zelda Williams, please click on the link.