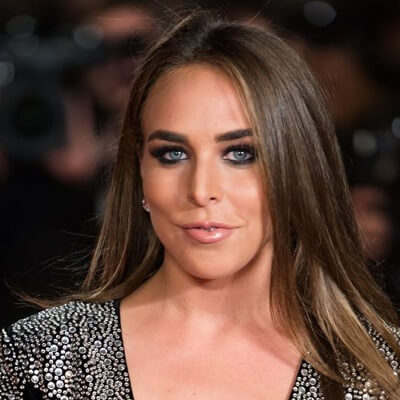 Chloe Green is currently in a relationship. She is dating Manuele Thiella. He is an Italian yacht broker and the co-owner of the company Royal Yacht Brokers, which has celebrity clients such as Madonna, and Chrissy Teigen.

The couple has been dating since 2019 with the pair spent the festive period together alongside Chloe’s family. Thiella has a child from his previous relationship.

Previously, Chloe was in several open relationships. Most notably, she was engaged to Jeremy Meeks nicknamed Hot Felon who became famous after a police mugshot of him went viral. The couple dated for two years and has a son from their relationship named Jayden. They split in June 2019.

After her split from hot felon Jeremy, Chloe briefly dated Rommy Gianni. Previously, she has been in relationships with Ollie Locke and Marc Anthony.

Who is Chloe Green?

Chloe Green is a British fashion designer and TV personality. She is best known as the daughter of British billionaire, Sir Philip Green.

Chloe Green was born Chloe Jade Green on March 2, 1991, in England, United Kingdom. As of 2020, her age is 29. She was born as the daughter of Sir Philip Green (father) and Tina Green (mother). Her father is the chairman of the Arcadia Group.

Combined, her parents are worth an estimated $4.9 billion. They purchased the retail company, Arcadia Group at the start of the 21st Century. People know her father as the British Donald Trump for his riches, arrogance, and flamboyance.

Talking about her educational background, she went to the International School of Monaco.

Chloe Green made her debut in her first collection through ‘Topshop’ which is owned by her father. She is now the heir to Topshop.

Chloe is also a socialite and is active and very popular on Instagram where she posts pictures of her luxurious lifestyle. She had started attending board meetings at the age of ten. She also has acting credits in Doctors, Secrets, and Words.

His father, Sir Philip Green is a British billionaire businessman who served as the chairman of Arcadia Group, a retail company that includes Topman, Topshop, Wallis, Burton, Evans, Miss Selfridge, Outfit, and Dorothy Perkins. The now-defunct BHS chain was also part of this group.

Green has brown hair and green eyes. She stands at a height of 5 feet 4 inches and weighs around 50 kg. She has not revealed her body measurements for breasts, waist, and hips.

Green has not been involved in any controversies. She has been able to keep herself away from any type of controversy and scandal. So far, she has not done anything controversial in her career. Similarly, there are no rumors about her of any kind. She has simply focused on her career and personal life.

You may also like to read more about the Bio, Career, Net Worth, Body Measurements, and more about Anna Gilligan, Ben Aaron, Patrick Whitesell, and more.

The hot felon Jeremy Meeks has probably given his girlfriend and Topshop billionaire heiress, Chloe Green an engagement ring!

The “Hot Mugshot Guy”- Jeremy Meeks and the “Topshop heiress”- Chloe Green spotted on another date! Click to find out more!