Chloe Melas is a reporter who currently works for CNN of New York City. 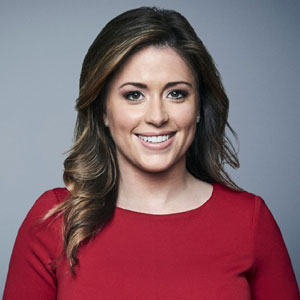 But there was one time that she felt truly crossed a line, that was when Morgan Freeman asked her not to pull down her skirt as she stood up to leave the interview.

Melas met her restauranteur husband Brian Mazza on a blind date in New York City in October 2012. They moved in together after four months. The blind date ended in a romantic wedding when Mazza proposed after eight months of dating.

The couple married in Grace Church in New York on October 25, 2014, two years to the day they met. Their wedding was “like every fairytale you’ve ever read had come to life in the room.” The couple went to the Turks & Caicos Islands and on an African safari for their honeymoon.

On July 3, 2017, Melas gave birth to their first child. The happy couple named their son Leo DeSales Mazza. They had one more reason to celebrate when; they were blessed with a boy on. Chloe shared the pictures of his baby on her Instagram account captioning “It’s great pride and joy.”

On 5th July 2019, the couple welcomed their second son, Luke Alessandro through in vitro fertilization.

Who is Chloe Melas?

Chloe Melas is an American reporter for CNN of New York City. She is the Senior Entertainment Reporter at HollywoodLife.com. She gained wide renown for her time as host of the VH1 show The Gossip Table from 2013 through 2015.

Chloe was born on July 11, 1986, in Atlanta, Georgia, the United States to Greek ancestry. She is now 31 years old. Her birth sign is Cancer.

Her parent’s name is Paul Melas and Elizabeth Murphy Melas. She spent her childhood days in Atlanta and then she moved to Dallas, Texas. She joined the Episcopal School of Dalla and used to play piano at the young age of 4. Lately, she went to college to follow Journalism.

Chloe has graduated from Auburn University in 2008 with a degree in Radio, Television, and Film. She interned on the Comedy Central series The Colbert Report as a senior.

Chloe began her career as a CNN, news assistant. In 2009 after meeting editor Bonnie Fuller she leaves her news assistance job. Bonnie gave her a chance of launching HollywoodLife.com.  Then she eventually became the site’s Senior Entertainment Reporter as her work was appreciated by everyone. In 2010, she hosted her own weekend entertainment segment on New York City’s WNYW television station. In 2011, she also became the host of Penske Media Corporation’s ENTV, where she filmed spots for ION, Yahoo, and Vodaphone.

In 2013, Melas was one of the best hosts of VH1’s morning show, The Gossip Table. The show ran for four seasons and was canceled in September 2015. In 2014, Melas joined the television station named WPIX with its weekly Hot List contributor of New York City. She used to discuss the biggest entertainment news of the week every Friday morning and everyone was interested in it.

Since March 2015, Melas has been a brand ambassador to New York-based women’s line of clothing concerned with fashion label, Maggy London. Melas is also a contributor to Fox News, HLN, and WPIX-TV shows in New York. She has also been an on-air personality for various pop culture programs, including The Today Show and Fox & Friends.

Chloe is loved by everyone and her work is also appreciated by all. But she hasn’t been awarded any type of awards yet.

Chloe Melas: Salary and Net Worth

The net worth of Chloe is not yet revealed. Her husband owns a famous New York City Restaurant and bars and is the president of Paige Hospitality Group. And their combined net worth is expected to be in millions.

Freeman responded to the claims by initially apologizing following the report that he hasn’t done anything knowingly but if she feels so he is sorry.

Melas has blessed with decent height and perfect curves. She stands at a height of 5 feet and weighs 57 kg. Her hair color is brown and her eye color is light brown.