Well-recognized Chinese filmmaker, producer, as well as screenwriter who is widely famed for her work in independent U.S. film. 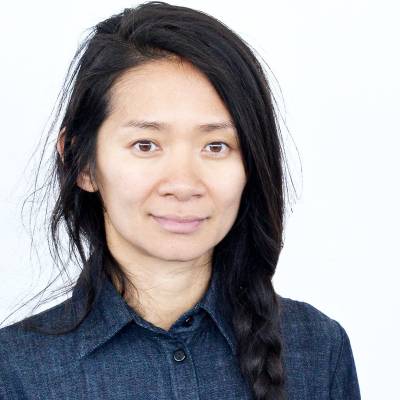 The pairs met as graduate students in NYU’s film program. Together the couple has worked in three films all directed by Zhao named Songs My Brother Taught Me, The Rider, and Nomadland.

Presently, the couple lives together in Ojai, California, the USA along with three chickens and two dogs.

Who is Chloe Zhao?

Chloe Zhao is a well-recognized Chinese filmmaker, producer, as well as screenwriter who is widely famed for her work in independent U.S. film. Zhao debuted in Songs My Brothers Taught Me (2015) that was featured at Sundance Film Festival.

Moreover, she created history by becoming the first woman of color and only the second woman at all to earn the best director award at the Oscars.

Chloe Zhao was born on 31 March 1982. At present, her age is 39 years old. Likewise, her birthplace is Beijing, China.

Zhao is the daughter of her father, Yuji Zhao whereas her stepmother is Song DanDan. Professionally, her father was a successful steel executive and her step-mother is a well-named Chinese comedy actress.

Talking about her nationality, Zhao holds a Chinese identity whereas her ethnicity is Asian.

The director grew up watching and enjoying Western pop culture. She studied at boarding school, Brighton College in England, and shifted to Los Angeles to complete her high school. Furthermore, she took her bachelor’s degree in political science at Mount Holyoke College in Massachusetts.

Zhao made her first film in the year 2015 named “Songs My Brothers Taught Me”. The film was shooted on location at the Pine Ridge Indian Reservation in South Dakota. The movie launched as part of the U.S. Dramatic Competition at the Sundance Film Festival. Moreover, it featured at Cannes Film Festival as part of the Director’s Fortnight selection.

In the year 2017, the director made The Rider, a contemporary western drama that goes after a young cowboy’s journey. The movie also premiered at Cannes Film Festival as part of the Directors’ Fortnight selection and earned the Art Cinema Award. Further, it was also nominated for Best Feature and Best Director at the 33rd Independent Spirit Awards.

Going on, Chloe also directed her movie, Nomadland which featured Frances McDormand in the year 2018. The movie was released on 19 February 2021. The Oscar winner director won the Golden Globe Award for Best Director and made history becoming the first woman of Asian descent honored.

Well-named filmmaker, Zhao has been active in her profession from the year 2008 till now. She has

It is reported that Chloe Zhao has an estimated net worth of $300 thousand.

However, the Oscar-winning director, Chloe has not disclosed her exact salary, earnings, and assets details till now.

Asian descent director, Chloe Zhao had a difficult relationship with her home country, mainly since a 2013 interview appeared in which Zhao said there were ‘lies everywhere’ when she was growing up.

Furthermore, Chinese authorities reacted by censoring marketing and mentions of Nomadland on social media, with an inquiry raised about the film’s release in the country.

Also, as per some official reports, it is known that Zhao felt like an outsider in the USA, in not having “the weight of history” on her. There was some false comment made by the newspaper that created the controversy. However, it was later removed by them on 16 February.

39 years old, Chloe Zhao has also gorgeous looks as well as a charming personality. She stands at a height of 5 feet 4 inches. Also, she has a balanced bodyweight of 58 kg.

Furthermore, Zhao has brown eyes whereas her hair is black. Her body measurement is 32-24-36 inches (chest-hip-waist) respectively.

About her social media presence, Chloe Zhao is not an active personality on social media.