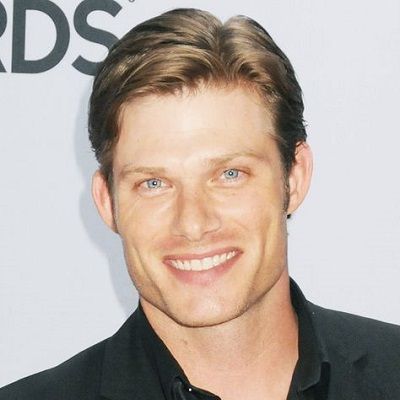 I'm honestly kind of scared of horror films. My girlfriend always tries to expose them to me. Being in a scary movie and seeing all the fake blood and stuff definitely takes away from the magic and kind of humanizes scary movies to me now, though.

I think a movie is a great date idea for younger couples. It takes the pressure off, since something else is entertaining you. It's also good for couples in a very comfortable relationship.

Chris looked elegant in a dark grey suit, white shirt, and bow tie. Erin wore a strapless white gown with a long flowing train of light-as-air chiffon and a circlet of small diamante flowers in her long brunette hair.

Likewise, she wore a double row of pearls and matching earrings and she held a bouquet of peach roses and purple flowers.

On 2nd March 2016, they announced their engagement. Likewise, they welcomed their daughter on 30th August 2016.

Who is Chris Carmack?

Chris Carmack is an American actor, singer and former fashion model. Chris is known for his roles in the popular teen drama series The O.C. and country music drama Nashville.

As of 2019, he then part of hit medical drama Grey’s Anatomy.

James Christopher Carmack was born on 22nd December 1980 in Washington, D.C., USA. He grew up in Derwood, Maryland in a family of five. He has a sister and a brother.

When he was young, he enjoyed participating in sports like baseball, basketball, football, and wrestling. Chris was a longtime counselor at Seneca Creek Day which sang the original Rocko the Lazy Moth and Ode to Salpino.

Chris attended Magruder High School in Rockville, Maryland. After that, he attended New York University in Greenwich Village, Lower Manhattan and pursued an Arts degree at the Tisch School.

In 2004, Chris played the role of Todd in Bring It On Again and Football player in 2005, Candy Paint. After that, he appeared in Love Wrecked, Just My Luck, Suburban Girl, H20 Extreme and The Butterfly Effect 3: Revelations.

Chris has appeared in a number of TV series like Strangers with Candy, Player$, The O.C., The Last Ride, Beach Girls, and Smallville. His other TV appearance are in Jack in Progress, Related, CSI: Miami, Higglytown Heroes, Desperate Housewives, CSI: NY and NCIS.

His recent series are Deadly Honeymoon, Grace, A Christmas Wedding Date, All About Christmas Eve and Nashville. From 2018, Chris plays the recurring role of Atticus Lincoln in the medical drama series Grey’s Anatomy.

Some of his soundtracks are in You Ain’t Dolly, What If I Was Willing, Can’t Say No To You, It’s On Tonight, If I Drink Thi Beer and others.

Chris has brown hair and blue eyes. He is 6 feet 1 inch tall.