YouTube star, Skateboarder, and content creator Chris Chann is single. If he had a girlfriend by now he must have made many videos with her. He has a tendency to show his whole lifestyle in vlogs and his content. So, there are no privacy concerns for hiding a girlfriend. 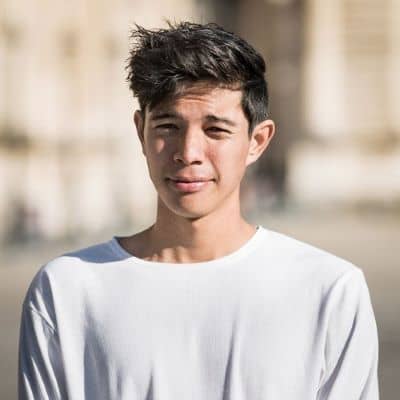 Who is Chris Chann?

Chris Chann is a skater, YouTuber, and social media influencer whose content is loved by the public as a result he is the #922nd Rank holder in entertainment.

He was born on November 29, 1992, to his mother Vicky in Los Angels, California. He is currently 29 years old and his zodiac sign is Sagittarius. His full name is Christopher Chann and holds American nationality under the same name.

Introducing his family, he has a younger brother named Ryan and his mother’s name is Vicky. However, other information regarding his family members, their professional background, and his educational journey is concealed.

Chris Chann is a tall guy with a height of 5 feet 8 inches and weighs around 65 kgs. Besides this, there is no information regarding his other body measurement details. He has dark brown hair and similar eyes. He has a bright white face that is ovular in shape.

Chris Chann is a young social media sensation whose Youtube videos have millions of views. He is a very skilled skateboarder who can flaunt his outlandish flip-tricking ability.

Briefing his Youtube career as a whole, is a huge success which has acquired over 1.4 million subscribers. Chris Chann has founded his official Youtube channel on February 22, 2009, which has earned over 235 million views in a span of 12 years. His first published video was a recording of President Barack Obama quickly saying “hello.” Later, he made YouTube a platform to exhibit his skateboarding aptitudes.

Particularly, the most loved skating trick on his Youtube channel is  Dragon Flip(360 Dolphin Flip). He has also collaborated with other  Youtube stars like Danny Duncan. By now, he has published around 600 Youtube videos.

The most popular video on this channel is Skater Vs Zombies POV, this 4-minute long video has 36 million views and was aired on June 9, 2015. Also, Returning A Pencil 5 Years Later is loved with over 11.5 million views since its upload on September 19, 2018.

He is an actor and producer who made Chris Chann in 2009, Camp Woodward in 2008, and Now Boarding in 2017 possible. He was nominated as Vlogger of the Year by the 11th Annual Shortly Award.

He has maintained himself away from rumors,  and controversies. There are no reported scandals that might hamper her professional career and personal life.

Being a social media influencer and content creator, he is active all over social media with a huge fan following. Chris Chann joined Twitter in May 2009, which has about 46.5K followers. Likewise, he is also available on Instagram with 644k followers where he is uploading stories and posts daily.

Back on April 19, 2014, he created an official Facebook page which now has a family of 62k followers. He also uses Snapchat under the username @chrischannzy.