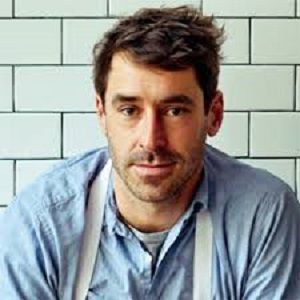 Chris Fischer is a married man. He was in a live-in relationship with Krishana Collins, who owns a flower studio in Martha’s Vineyard.

After his break-up with her, he started dating Amy Schumer whom he had met through common friends.

The couple entered wedlock on February 13, 2018, in a grand ceremony that witnessed the presence of famous Hollywood stars, including the likes of Jennifer Aniston and Jennifer Lawrence.

On 5 May 2019, this couple welcomed their son. They named him Gene David Fischer.

Who is Chris Fischer?

Chris Fischer is an American chef and farmer. He is also the husband of stand-up comedienne and actress Amy Schumer.

Chris Fischer was born in Chilmark, Massachusetts, the United States on August 19, 1980, and he is currently 38 years old. His father’s name is Albert Fischer III, but his mother’s name is unknown.

Additionally, he grew up in a 5.7-acre parcel of land, which was bought by his grandfather, Albert Oswald Fischer Jr., in 1961.

Chris was also presented with an opportunity to connect with nature and food right from his childhood. He has a sister named Molly Fischer. Chris holds American citizenship but his ethnicity is unknown. His birth sign is Leo.

Talking about his education, there are no details available relating to Chris’s educational background.

On talking about his profession, Chris Fischer initially worked as a farmer, working along with his family members on the Beetlebung Farm.

Thereafter, he became a chef, and worked in restaurants like ‘Babbo,’ ‘The River Cafe,’ and ‘St John Bread and Wine.’ Then, he returned to Martha’s Vineyard and took over his family farm, where he started cooking privately.

In 2015, Chris came up with a book titled ‘The Beetlebung Farm Cookbook: A Year of Cooking on Martha’s Vineyard,’ which was written along with Catherine Young.

Talking about his awards, and nomination he has won James Beard Award for American Cooking.

Fischer has not revealed his salary. Furthermore, there is no information about his estimated net worth.

There was a rumor that Schumer’s pregnancy began shortly after she and Fischer tied the knot in a private ceremony in Malibu, California, on Feb. 13, 2018. Currently, he is far from controversies and rumors.

Chris Fischer has a height of 5 feet 9 inches. Additionally, he weighs is 75 Kg. Furthermore, Chris’s hair color is dark brown and his eye color is hazel.