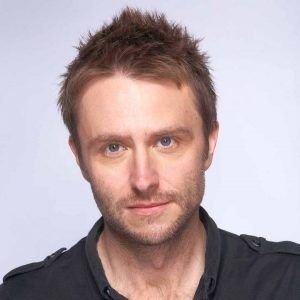 Ultimately, it's the best decision I've ever made in my life. There's an economy of energy that you have in your life. You just have to devote it to things that are good for you, for the most part, that's more constructive than drinking. And one of them doesn't end in uncontrollable vomiting and crying...The first thing I noticed about sobriety? I lost about 20 pounds within a couple of months.

She wanted to know how everything worked and how people were communicating now and she wanted to understand digital content. I adored her and she was lovely and a pioneer. She never stopped working-such an inspiration.

Chris Hardwick was engaged to model/actress Jacinda Barrett, but the relationship didn’t go well so they decided to break up. Then, he had a romantically associated with actresses Chloe Dykstra, but they broke up. Likewise, he was in a relationship with Janet Varney, but they also broke up.

Moreover, he engaged to model, blogger, heiress, and actress Lydia Hearst on September 12, 2015, and the couple married on August 20, 2016, in Pasadena, California.

Who is Chris Hardwick?

Chris is an American stand-up comedian, actor, television host, writer, producer, and podcaster. He has also Talking Dead, an hourly aftershow on AMC affiliated with the network’s zombie drama series The Walking Dead and Fear the Walking Dead.

Chris was born in Louisville, Kentucky, the United States on November 23, 1971  age (47). He is the son of Billy Hardwick (father) and Sharon Hills (mother). His father was a professional bowler and his mother was a real estate agent.

He was raised in Memphis, Tennessee, as a Roman Catholic following his mother’s faith. Additionally, when he turned four-year-old boy he met famous American comedian, actress, television host, writer, and producer Joan Rivers at the time a struggling TV personality and comedian.

He has a sibling namely, Eddie Hardwick. He belongs to American nationality and mixed (Italian-English- Scottish- Irish- German-French) ethnicity. His birth sign is Sagittarius.

On talking about his profession, his acting endeavors started in the early 1990s that saw him doing a bit role in the popular award-winning American drama television series ‘Thirtysomething’ (1991). Whereas, he also became the host of the MTV game show ‘Trashed’ that ran for 50 episodes from February 14, 1994, to July 23, 1994.

Likewise, he also formed a comedy/parody musical duo ‘Hard ‘n Phirm’ with Mike Phirman. They also started performing at UCLA in 1994 but broke up in 1997. During 1995 he also began hosting MTV dating game show ‘Singled Out’. Similarly, in 1996, he also forayed into films with the movie ‘Beach House’.

Similarly, he also continued featuring in other movies including ‘House of 1000 Corpses’ (2003), ‘Terminator 3: Rise of the Machines’ (2003) and ‘The Mother of Invention’ (2009) among others. In fact, he also delved into voice acting playing Glowface in the Carlos Ramos created American animated TV series ‘The X’s’.

During 2005, he also played Milos in the mockumentary ‘The Life Coach’. Eventually, one of his notable voice roles was that of Otis in the Nickelodeon computer-animated TV series ‘Back at the Barnyard’. From that year he started contributing as a writer for the Condé Nast owned American monthly magazine ‘Wired’.

Additionally, he also featured among correspondents of the American live television program ‘Attack of the Show!’. In addition, he has also been hosting the weekly interviews show ‘The Nerdist Podcast’ since February 2010 along with Matt Mira and Jonah Ray.

There is no information regarding his income, salary. Whereas, his net worth was around $15 million.

There was a rumor that he sexually assaulted his ex-girlfriend, Chloe Dykstra, while they were involved, the Talking Dead host has strongly denied the claims. Currently, he is far from rumors and controversies.

On talking about his body measurements, he has a height of 5 feet 11 inches. Additionally, his weight is 74Kg. Chris’s hair color was blonde and her eye color was blue.

Also, read the affair, salary, the net worth, controversy, and the bio of Doug Stanhope, Richard Belzer, Rickey Smiley