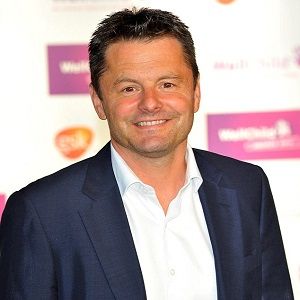 The dashing television personality Chris is a married man. Chris tied the knot with his long time girlfriend Sarah Alexander in 2012. Prior to marriage, the couple was in a gorgeous relationship for a couple of years. Furthermore, they have also welcomed a baby in the year 2014. Since their marriage, the beautiful couple has been living happily. Apart from her, the sports anchor has never seen with anyone and there are not any rumors of his external affairs and girlfriend. As a perfect couple, they have maintained a sound relation between them and living happily.

Who is Chris Hollins?

Chris Hollins is a British host, journalist, and sportsman. Chris came into the spotlight after winning Strictly Come Dancing in 2009. Furthermore, he got huge recognition as a sports correspondent for BBC Breakfast until 2012. Furthermore, Chris has also hosted the BBC consumer rights series Watchdog from 2010 until 2015.

Chris was born on March 20, 1971, in Bromley, United Kingdom. He is the son of England and Chelsea footballer, John Hollins and Linda Hollins. Furthermore, his uncle is also a footballer, played for Newcastle United and Wales as a goalkeeper. Talking about his childhood, Chris had a keen interest in sports in which he had played football for Charlton, Queens Park Rangers, and also played the first-class cricket at Oxford University.

Chris began his career in television at London TV station Channel One TV. Later, he started to work with Associated Newspapers. In 1994, he shifted to Sky Sports. Additionally, he has also worked with GMTV, Meridian, and Five TV. Moreover, Chris was the regular presenter of the show, Breakfast till 2012. Furthermore, he has also hosted the  2002 World Cup, the 2010 World Cup, and The Master’s golf in 2007. In 2009, Chris enrolled at the BBC One antiques show Cash in the Attic. In 2010, the veteran anchor was appointed as a co-presenter on BBC show Watchdog followed by The Great British Weather in 2011.

Apart from that, Chris has also won the 2009 series of Strictly Come Dancing alongside his partner Ola Jordan. Chris has also appeared as a marathon commentator in 2007 movie, Run Fatboy Run alongside Denise Lewis. Furthermore, he is also a patron of children’s cancer charity CLIC Sargent and an ambassador for Gold Challenge. He regularly takes part in various charity shows.

As a successful journalist and sportsman, Chris has earned a huge amount of money through his profession. However, there is not any information regarding his net worth.

So far, Chris has not won any awards. However, his works have been loved and appreciated by his fans and many people all around the world.

So far, there are not any drastic rumors regarding his personal and professional life. Moreover, Chris has not been dragged into any controversy to date. It seems, he has full concentration on his work.

Chris has a height of 5 ft 8 inches and his weight is unknown. Furthermore, he has brown eyes and light brown hair.