Chris Isaak has not married yet. Previously, he dated Chinese actress Bai Ling and they separated in 2000. Later, he dated Canadian actress Caroline Rhea in 2002 but they separated after one year. He worked for a long time with his band. He is focused on his career at the moment. 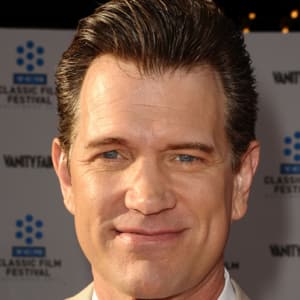 Who is Chris Isaak?

Chris Isaak is an American rock musician and occasional actor who is best known for his hit ‘Wicked Game as well as the popular hit songs Baby Did A Bad Bad Thing’ and ‘Somebody’s Crying’. He is also famous for his signature 1950s rock & roll style and crooner sound. He songs mainly focus on the themes of love, loss, and heartbreak. Chris is often compared to Ricky Nelson, Duane Eddy, and Elvis Presley.

He was born on June 26, 1956, in Stockton, California. He is currently 62 years old. His mother’s name is Dorothy Vignolo and his father’s name is Joe Isaak. His father was a driver of cranes and his mother was a worker of a potato chip industry. His mother is Italian-American, from Genoa and his father’s family is Catholic Black Sea German form, North Dakota. He is the youngest of the three boys, the others being Nick and Jeff Issak. His mother lives in California with his two brothers but his father died before seven years. He holds American citizenship and his ethnicity is Mixed(Bessarabia German and Italian).

He graduated from Amos Alonzo Stagg High School in North Stockton and later attended San Joaquin Delta Community College and transferred to the University of the Pacific and graduated from there in English and communications arts in 1981. He also studied in Japan because of the exchange program.

He debuted his career by singing in clubs and bars to sell themselves. He met Erik Jacobsen, who helped him blossom in his career and he released his first album which was named after his music group ‘Silverstone’ after he got a recording contract with Warner Bros. Records in 1985. The album was widely acclaimed but it did not do well with the sales.

He released his sophomore album, Çhris Isaak’in 1987 which did so well in the charts and was certified gold in the US. He got the opportunity to be the opening act on the tour of one of his early music influence, Roy Orbison.

He released his third album ‘Heart Shaped World’ in 1989 and his one of the songs on the album, ‘Wicked Game’ became a global hit. The renowned film producer, and director, David Lynch used the soundtrack in his film ‘Wild at Heart’ in 1991. After three years of the song released, the song rose to an astonishing #6 and #10 in the US and UK Billboard pop charts respectively in 1991.

He debuted in his acting career from a small part in the crime drama-comedy ‘Married to the Mob ’and played the role of clown. He appeared again for Jonathan Demme in his ‘Silence of the Lambs’ in 1991, and played in David Lynch’s ‘Twin Pekas: Fire Walk With Me’in 1992, and played the role of the father of the main character in ‘Little Buddha’ in 1993. Chris also made his appearance in John Water’s Á Dirty Shame’ in 2004 and ‘The Informers’ in 2009.

It is estimated that he has a net worth of around $21 million and his main source of income is from his professional career.

There was a rumor that he was dating Helena Christensen, who is a model in his ‘Wicked Game’ music video in 1991.

He has a height of 6 ft. 0.5 inches. He has got light brown hair and light brown eyes. Other information about his dress size, shoe size, etc. are not available.