He has two children. They are Ben and Jack. Likewise, there is no news of their divorce and extramarital affairs. 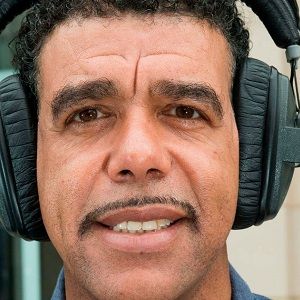 Who is Chris Kamara?

Christopher Kamara known as Chris Kamara is an English former professional footballer and football manager. At present, he works as a presenter and football analyst at Sky Sports.

He was born on 25th December 1957 in Middlesbrough, England. He is the son of Alimamy Kindo Kamara and Irene Kamara. Similarly, he has a sister Maria Kamara and a brother George Kamara.

His nationality is British whereas his ethnicity is unknown.

He was known as a tough-tackling midfielder. Similarly, he joined the Royal Navy at the age of 16, before being signed up to Portsmouth in November 1974. Kamara spent three years at the club before being sold on to Swindon Town for £14,000. After that, he returned to Portsmouth in the year 1981 for a £50,000 fee but was traded to Brentford in October 1981.

Similarly, he spent four years with the “Bees” before leaving the club after picking up a runners-up medal in the Football League Trophy in the year 1985. After that, he re-signed with Swindon Town in August 1985 and helped the club to two successive promotions into the Second Division. He moved on to Stoke City in 1988, and a successful spell with the club won him a move to Leeds United in the year 1990.

Likewise, Chris Kamara helped the club to the Second Division title in 1989–90 but was never a first-team regular before being sold to Luton Town for £150,000 in the year 1991. After that, he had loan spells with Premier League clubs Sheffield United and Middlesbrough, before joining Sheffield United on a permanent basis in the year 1993. He joined Bradford City as a player-coach.

Moreover, he was appointed Bradford City manager in November 1995 and took the club from a relegation scrap to promotion out of the Second Division via the playoffs in the year 1996. Similarly, he left the club in January 1998 and quickly took the reins at Stoke City, before he left the “Potters” in April 1998. Furthermore, from there he became a broadcaster with Sky Sports and has since appeared as a presenter on numerous other television programs.

The estimated net worth of Chris Kamara is around $20 million as of 2022. He joined Swindon Town in August 1985 for a fee of £12,500. He had a successful career so he might earn a huge amount of money from his career. But he has not disclosed his salary and incomes.

Talking about Chris Kamara’s body measurements, he has a height of 6 feet and his weight is around 81 kg. His hair color is black and his eyes color is dark brown.