Christopher Lee Kattan is an American actor, comedian. Christopher is dating a model.

Chris is dating Cheyenne Gordon since December 2019. His girlfriend is a model. He went public with Cheyenne by revealing it on his IG.

But the marriage didn’t work out and he got divorced within 2 months of marriage. He was married to the model, Sunshine Deia Tutt. They tied the knot on June 28, 2008, after dating for some time.

The wedding ceremony took place in Oakhurst, California. But the things didn’t work out between them and they separated on August 10, 2008. But, legally, they separated in February 2009.

Long before this marriage, he was in relationship with model/actress, Jennifer Gimenez in 1999.

After a couple of years in 2001, he was dating Jennifer Coolidge.

He also dated actress/comedian, Maya Rudolph in the past. 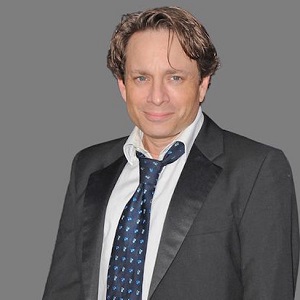 I like light green, sometimes red is fun to look at, not a fan of yellow, unless it's in a rainbow or on a coffee mug or on a happy face.

Believe in yourself and try not to take anything personally.

I'm not trying to sound like I turned into some kind of wise man, but it's nice to realize that your little pocket of the world isn't the whole world.

Who is Chris Kattan?

Chris Kattan is a talented actor and a comedian. Chris is a TV and film actor who appeared in a 1998 American comedy film, “A Night at the Roxbury”.

Additionally, he is also known for playing Bob is an American sitcom, “The Middle”.

Presently, he is a prominent figure among the audience because of his astounding work on Saturday Night Live.

He did impersonations of several celebs like Ben Affleck, Clay Aiken, Ricky Martin, Al Pacino, and so on.

Chris was born in the city of Los Angeles in the state of California on October 19, 1970. He possesses American nationality and his ethnicity is mixed (Iraqi, Hungarian, and Polish).

His birth name is Christopher Lee “Chris” Kattan. He was born to parents, Hajnalka E. Biro and Kip King (Jerome Kattan). He grew up in a family following the Jewish faith. Chris grew up on a Zen retreat on Mount San Antonio.

As per his education, he joined Bainbridge High School. He completed his graduation from there in 1989.

Chris is a comedian and an actor by profession. He started his career as a comedian being part of various comedy troupes.

In his early career, he also featured in films in minor roles. To pursue his career, he moved to New York City in 1996. The same year he joined the SNL.

During his time in SNL, he did some amazing impressions of celebrities like Ben Affleck, Clay Aiken, Ricky Martin, Al Pacino, Steve Irwin, Robert Downey Jr., Davis Spade, David Gest, and so on. In 1998, he made his debut in the film, “A Night at Roxbury”.

He played the famous character of Bob in a middle-class family-based sitcom, “The Middle”. Additionally, he starred in various TV series like, “Grace under Fire”, “How I Met Your Mother”, and so on.

Chris was part of the controversy after getting arrested.

According to authorities, he was driving under influence. He didn’t accept his mistake but later on, he was proved guilty.

His eye color is blue and his hair color is dark brown. His shoe size is unknown.

Also know more about the early life, career, net worth, relationships, and controversies of other actor and a comedian including Andrew Dice Clay, Vice Ganda, Russell Brand