Chris Klein is an actor of the ‘American Pie’ comedy teen films.

Chris Klein was previously in a relationship with actress Katie Holmes.

The pair began dating in January 2000. They were later engaged around Christmas of 2003. However, they called off the engagement and the relationship came to an end in March 2005.

Currently, Klein is a married man. He is married to a travel agent Laina Rose Thyfault. The couple first met at a friend’s wedding in 2001. They later got engaged in December 2014 and eventually married on August 9, 2015.

They have two children from this marriage, a son Frederick Easton Klein and a daughter Isla Rose Klein. Klein’s marriage is going strong as there is no news regarding any extramarital affairs at present. 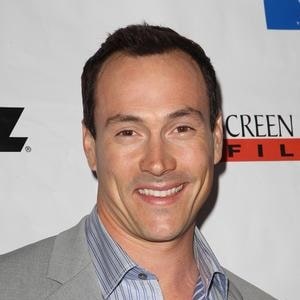 I don't need food to impress, man. It's a flash of a smile and a nice conversation. And at the end of the day, she's cooking the food.

(2012, on quitting drinking) I realized I had to get it straight and realize what the fuck was going on because the me that I knew was slipping away. At that point, fuck acting. Can I even get out of bed? I was a 31-year-old man with bills to pay, a dog to take care of, and my mother sick with worry. And I'm in jail again. How did I get here? Living with addiction is not living, it's existing and barely hanging on. I was sick and tired of feeling that way and I didn't know how to not feel that way, so I got help.

(2012) Rollerball was definitely a dud. I was 21-years-old, working on a movie with a budget of $103 million, and working with John McTiernan, who did Die Hard, Predator, and The Hunt For Red October. I did the best I could with that project. But listen: the movie doesn't work. There's a lot of reasons for it, but it certainly wasn't for lack of effort on my part.

Who is Chris Klein?

Additionally, he has appeared in numerous movies and TV series including ‘The Flash’, ‘Game of Aces’, and ‘How We Live’ among others.

Klein was born Frederick Christophe Klein in Hinsdale, Illinois on March 14, 1979. He was born to parents Terese and Fred Klein. His father is an Engineer and his mother is a kindergarten teacher.

Additionally, Klein has an older sister, Debbie, and a younger brother, Timothy. He developed an interest in acting in his childhood years and acted in his high school’s performance of ‘West Side Story.

He is of American nationality. Furthermore, he belongs to a mixed ethnic background of German, Irish, and English.

Chris Klein landed his first major role in ‘Election’ as Paul Metzler in 1999. Additionally, in 1975, he appeared in the movie ‘American Pie as Chris ‘Oz’ Ostreicher. He played the role of Kelley in ‘Here on Earth’ and also portrayed Gilbert Noble in ‘Say It Isn’t So’. In 2001, he reprised his role as Oz in ‘American Pie 2’.

Some other movies and television series that Klein has appeared in are ‘The Competition’, ‘The Grinder’, ‘Idiotsitter’, ‘Motive’, ‘Damaged’, ‘Wilfred’, ‘Authors Anonymous’, ‘TRON: Uprising’, ‘Cops Uncuffed’, ‘Raising Hope’, ‘Franklin & Bash’, ‘American Reunion, ‘The Good Guys’, ‘Caught in the Crossfire’, ‘The Six Wives of Henry Lefay’, ‘Welcome to the Captain’, and ‘Hank and Mike’ among others. In addition, he also has credit as a producer.

Klein has not revealed his current salary. However, he has an estimated net worth of around $3 million at present.

Klein became part of a controversy after he was arrested for drunk driving in San Diego County on February 5, 2005. Additionally, he was also arrested again on June 16, 2010, in Los Angeles. At present, there are no rumors concerning his life and career.

Talking about his body measurement, Chris Klein has a height of 6 feet 1 inch (1.85 m). Additionally, he weighs around 80 kg. Furthermore, his hair color and eye color are dark browns.

Similarly, his Facebook page has more than 25k followers.