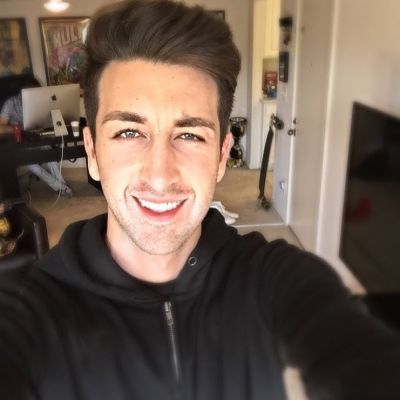 It is surprising to know that a handsome guy like Chris Monroe is still single and is not dating anyone at the moment. Moreover, he keeps on involving in kissing content on his social media handles and trying the social experiment on kissing with women especially.

Chris has not shared his relationship details or related news with the public till now. The star seems to be private in nature and hardly shares his private things with the public.

Who is Chris Monroe?

Chris Monroe is a well-recognized American YouTube star. Monroe is widely famed for the PrankInvasion YouTube channel that has more than 23.1k subscribers and it contains public prank videos, social experiments, and trolling videos.

Moreover, his pranks are regularly directed at women including his kissing Challenge prank.

Chris Monroe was born on 21 March 1993. At present, his age is 28 years old. Likewise, his birthplace is Florida, the USA.

Not much is known about his father and mother’s details, Chris has been secretive towards his family details. Moreover, he has a sister named Kaitlyn O’Connor and two half-sisters whose identity is still behind the curtain.

Talking about his nationality, Monroe holds an American identity whereas his ethnicity is Caucasian.

Regarding education, the star has not mentioned his academic background to the public. He might have completed his graduation from the university of the town.

Professionally, Chris is engaged in the YouTube platform. He started his YouTube journey on 26 November 2012. He also started his second channel for vlog called PrankInvasionVlogs on July 30, 2014. This channel is fully devoted to Kissing Pranks since 28, 2015.

Monroe additionally is better known as PrankInvasion has earned more attention from his public prank videos, social experiments, and trolling videos. His pranks videos are regularly focused and aimed at women which consists of the Kissing Challenge pranks. However, due to his extreme kissing content, the YouTube channel was terminated.

The YouTube star has even tried kissing pranks with his mother as well as sisters which is insane and shocking for his fans. He has uploaded a video titled, WHAT’S IN MY MOUTH CHALLENGE!, which featured Nicole Skyes. Likewise, Chris posts many editions of kissing pranks like Whipping cream edition, Eyes contact edition, Street Edition, Mother edition, Grandparents edition, BLOW JOB Edition, Cops edition, Homeless edition, and many more.

Monroe is also active on Instagram and has gained more than 110k followers. He also posts his kissing pranks videos on his Instagram handles.

An American YouTuber, Monroe has earned a healthy amount of money from his profession. He lives a lavish lifestyle along with his family in South California.

It is reported that Chris Monroe has an estimated net worth of $500k-$1million.

Since the platform is not for pornography or sexually explicit content, his YouTube channel Prankinvasion was beforehand warned on YouTube. This caused him to temporarily fix his videos down, but he came back up in his vlog channel, his 2nd channel Chris Monroe, and they declared on his main channel as well.

His YouTube channel has been terminated totally. Additionally, he came into the light after posting videos kissing his sister and mother.

28 years old YouTuber, Chris has handsome looks and an admirable personality. He has not mentioned his exact height but seems to be nearly 6 feet.

Furthermore, Monroe has green eyes whereas his hair is brown eyes.

Regarding his social media presence, Chris Monroe is an active personality on social media. Chris has more than 110k followers on his official Instagram account @prankinvasionchris.

He is also active on Twitter with around 40.5k followers. He owns a YouTube channel named Prank invasion and it has more than 23.1k subscribers at the moment.

Moreover, Monroe is also available on Facebook with nearly 143k fans and supporters.