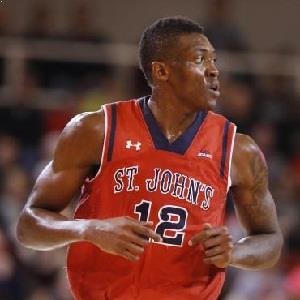 Reflecting on a personal life of Chris Obekpa, he is possibly single. There isn’t any information regarding his romantic relationship affairs. His personal life isn’t in the limelight as his career path is.

He is currently focusing towards his career path than being in a romantic relationship. There isn’t any solid proof which leads towards his married lifestyle and children. Being a celebrity, his personal stuff is always a matter of discussion and interest to the public.

Who is Chris Obekpa?

Tall and handsome Chris Obekpa is a well-known Nigerian professional basketball player. He is best known as the player for Santa Cruz Warriors of NBA Development League. He plays from center position wearing a jersey number 21.

Chris was born in Makurdi, Nigeria. He was born on 14 November 1993. Obekpa has African ethnicity and has a Nigerian nationality.

His birth name is Christopher Ewaoche Obekpa. He is the son of Elizabeth O. Ameh and Gabriel Obekpa, Chris Obekpa. His father is the prince and his uncle Elias Ikeoyi Obekpa is the current king of Idoma tribe. He has six sisters and three brothers. Since childhood, he has built up a strong interest towards basketball sports.

He studied at Our Savior New American in Centereach, New York and attended St. Jhon’s University.

On 21 October 2016, he signed with the Golden State Warriors but the very next day he was released from the team Warriors. Chris was signed by the  Santa Cruz Warriors on 31 October 2016. Later, Chris joined the Phoenix Suns for the  2017 NBA Summer League on 3rd July 2017.

He was rumored to be playing for UNLV but instead, he chose St. Jhon’s.

Chris has a height of 6 feet 9 inches. His body weighs 104kg. He has black hair and black eyes. Furthermore, there are no details regarding his body measurements.