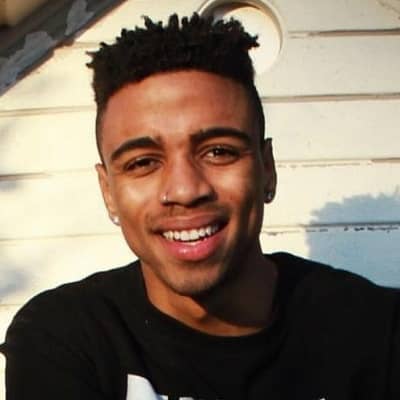 Chris is currently living his single life and isn’t engaged in any relationship.

During a Q&A session in his Youtube video, Chris shared that he would love to date his fan and believes that anyone who truly cares about him could be his girlfriend.

Moreover, there also rumors about him dating actress Ariel Mortman. The rumors were spread as they are an onscreen couple on the Greenhouse Academy series.

Who is Chris O’Neal?

The actor came into the limelight after appearing in shows like  Swindle (2013), Greenhouse Academy (2017), and AMP House.

Chris was born on 4 April 1994 in Teaneck, New Jersey. his full name is Christopher Richard O’Neal.

The actor has featured his mom and dad in one of his Youtube videos, and through his Instagram posts. However, he hasn’t revealed their names and details.

He has a brother named Terell O’Neal.  He hasn’t much revealed about his family and childhood.

However, he shared that his family laughing while watching TV shows helped him realize that he also wants to do acting and make people happy.

Chris holds an American nationality and belongs to Afro-American descent.

Chris attended Teaneck Community Charter School. After that, he has his schooling at Teaneck High School.

Chris started his acting career appearing on various commercials and in a Saturday Night Live skit. The actor co-hosted the Nickelodeon series, You Gotta See This alongside Noah Crawford.

He receives his first recurring role in the 2012 Nickelodeon series How to Rock. The show was premiered on 4 February 2012 and it ended on 8 December 2012. Chris O’Neal played as Kevin Reed there.

After that, Chris starred in the 2013 Nickelodeon film Swindle. Likely he appeared in the Dairy Queens commercial. Moreover, the actor also raps and writes poetry. He dropped his EP “Just getting started“ in 2014.

Chris has starred in are Raven’s Touch, K.C. Undercover in 2015, and Here We Go Again in 2016. Chris came more into the limelight after being a cast member of the 2017 Netflix drama series Greenhouse Academy.

In this series, Chris one of thas portrayed as one of the main roles of Daniel Hayward. It has finished four seasons. Its last season was just released on March 20, 2020.

Talking more, the actor also shares that he wishes to produce and write his own shows in the future.

The actor has already amassed a net worth of $1 million from his career.

The series regular actors receive the average salary from $4,302 to $5,613 per week. working for Greenhouse academy, Chris also must have a good salary.

The actor has always avoided being engaged in any controversial activities.

Although being a part of the limelight, their rumors are spread in the media. Likewise, Chris was also rumored to be dating his on-screen girlfriend (actress Ariel Mortman) in the series Greenhouse Academy.

However, he has shared that he is single and doesn’t engage in any kind of relationship as of now.

The actor self-describes himself as tall and skinny. He stands tall with a height of 6 feet and 2 inches and weighs around 75 kgs.

Chris has both black-colored hair and eyes.

You may also read the bio of Callan Potter, Ivana Baquero, Alvaro Mort, and Skylar Gaertner.