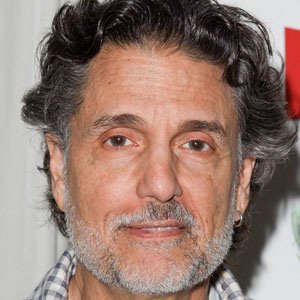 “Being on stage is a seductive lifestyle. My advice to aspiring actors is think twice. People sometimes go into acting for the wrong reasons - as a shortcut to fame and fortune. If these goals are not attained, they feel a bitter disappointment. Acting should be an end in itself.”

They first met during the performance of Broadway’s short-lived 1991 musical ‘Nick & Nora’ and after that, they collaborated in several films like ‘Edie & Pen’, ‘American Perfekt’, ‘Road Ends’, etc.

He was previously married to actress Susan Sarandon in 1967 but he divorced her in 1979.

Later, he married Lisa Ann Cooper in 1980 and they welcomed two daughters and a son, Stephaine, Alexis, and Michael. The relationship also ended in divorce in 1989.

Who is Chris Sarandon?

Chris Sarandon is an American actor and he is best known for playing Prince Humperdinck in the film ‘The Princess Bride’, Detective Mike Norris in ‘Child’s Play’ in 1988, and for his voice performance of Jack Skellington in ‘The Nightmare Before Christmas’.

He got a nomination for an Academy Award for Best Supporting Actor for his character as Leon Shermer in ‘Dog Day Afternoon.

He was born on July 24, 1942, in Beckley, West Virginia. He is 76 years old and his birth sign is Leo. His father’s name is Christopher ‘Chris’ Sarandon and his mother’s name is Cliffie.

They are both restaurateurs. He holds American citizenship and his ethnicity is Greek. He has a brother, John Peter Sarandon, and does not have any sisters.

He graduated from Woodrow Wilson High School and earned a degree in speech at West Virginia University.

He earned his master’s degree from The Catholic University of America in Washington, D.C.

He debuted in the play ‘The Rose tattoo’ in 1965 after he completed his graduation. Chris made his way to New York City in 1968 and he obtained his first television role as Dr. Tom Halverson in the series ‘The Guiding Light’ from 1973 to 1974.

He played in the movies ‘The Satan Murders in 1974, ‘Thursday’s Game’, and ‘Dog Day Afternoon’ as Al Pacino’s transgender wife in 1975.

Chris made his appearance in the Broadway play ‘The Rothschilds’, ‘The Two Gentleman of Verona’, in the thriller movie ‘Lipstick’ in 1976, and as a demon in the movie ‘The Sentinel’ in 1977.

He portrayed the title role of Christ in the made-for-television movie ‘The Day Christ Dies’ in 1980, played Sydney Carton in ‘A Tale of Two Cities in 1980, as Prince Humperdinck in ‘The Princess Bride’ in 1987, and provided the voice of Jack Skellington in the movie ‘The Nightmare before Christmas’ in 1993, etc.

He appeared in a recurring role as Dr. Bruke on NBC’s long-running medical drama ‘ER’.

He appeared on ‘Nick & Nora in 1991 with Joanna Gleason and played Signor Naccarelli in the musical play ‘The Light in the Piazza at Lincoln Center in 2006 and recently appeared as Antonie de Guiche in ‘Cyrano de Bergerac’.

It is estimated that he has a net worth of around $5 million and his main source of income is his professional career. His salary and income are under review.

He is very much secretive about his personal and professional life and he has not been engaged in any rumors, scandals, or controversies.

He has a height of 6 ft. 1 inch. He has black and grey hair and light brown eyes.

Other information about his weight, shoe size, dress size, etc. is unknown.

He has around 435 followers on Twitter but he is not active on Instagram and Facebook. He does not seem to be that much active on social media.

To know more about Chris Santos, Rodger Bumpass, and Andersen Gabrych, please click on the link.

Is Chris Sarandon related to Susan?