Chris Segal is an American Baseball umpire. He is best known as an umpire of Major League Baseball (MLB). He is possibly single.

Even if he is married or dating anyone, he has ket his romantic life private. 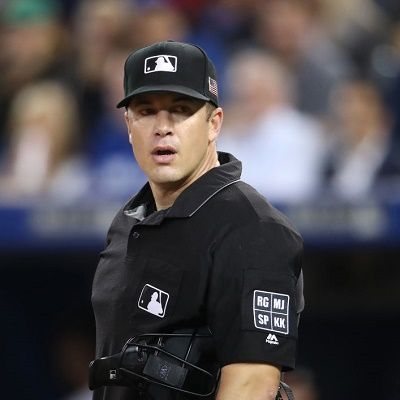 St. Mary’s set me up in a really good position to basically do anything I wanted to do.

I’ve met a lot of good people and have had countless great experiences as an umpire.

Who is Chris Segal?

Chris Segal is an American Baseball umpire. He is best known as an umpire of Major League Baseball (MLB).

This umpire was born on July 13, 1982, in Falls Church, Virginia with a birth name Christopher Robert Segal.

As per his academics, he graduated from St.Mary’s College of Maryland. Segal belongs to Jewish Descent.

Chris Segal served as a part-time MLB umpire since 2014. Earlier, he used to play catcher and outfield as a member of the St.Mary’s baseball team. Segal earned numerous awards throughout his career including the Capital Athletic Conference Rookie of the Year, the Coache’s award, and the St.mary’s Athletic Director’s Award.

He began his umpiring career through his college years. he worked variously in northern Virginia and St.Mary’s country.

Following graduation, he wasted little time to start his career and quickly enrolled in the Jim Evans Academy for professional umpiring in 2006. Afterward, he ascended to the Triple-A level and started to get evaluated by major league supervisors. Chris was invited to umpire the ‘Arizona Fall League’ and eventually was invited to work Spring Training in 2010.

Six years later, a full-time MLB umpiring position opened up and Segal was awarded the major league number from a call-up list of 15 candidates, becoming one of 76 big league umpire. He is assigned a crew that will travel all over the country to work as a full-time MLB umpire.

This umpire and his crew will work approximately 120 games in the upcoming season.

The average salary of MLB umpire is $350,000. As of 2022, The net worth of Chris is under review. We will update you as soon as we got the information.

Segal was struck in the head by the bat of Josh Donaldson in a game between the Toronto Blue Jays and the Boston Red Sox on July 17, 2017. He made headlines by ejecting Brett Gardner of the New York Yankees for arguing ball and strikes from the dugout on August 9, 2019.

Chris Segal has a height of 6 feet and weighs 91 kg. Likely, he has dark brown hair and green eyes.

Chris is not active on social media including Facebook, Instagram, and Twitter. He likes to spend his good times with his family rather than on social media.