Posted by MarriedBiography Posted on December 9, 2020 | In Child , Married , Relationship
Share this 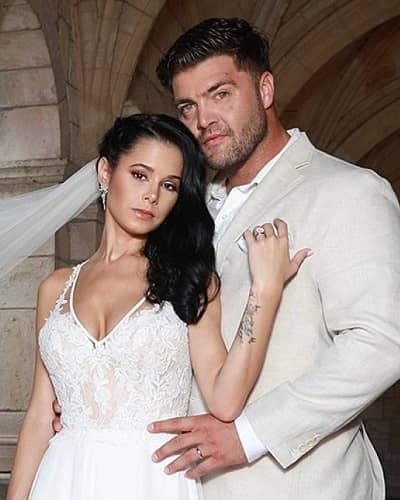 Chris Tamburello is still married to his wife Lilianet Solares. Even though Chris revealed that they had separated prior to filming Double Agents. They walked down the aisle on 8th September 2018 after dating for some time. On 7th December 2020, sneak peek of the new Challenge he said,

“Remember me? Good because I almost forgot, the last few seasons I wasn’t in the best place mentally. Marriage was not going well. We’re separated, and I feel like I’ve been running from problems for a long time. I feel like they finally caught up with me. I couldn’t lie to myself anymore.”

They have kept their life extremely private. Chris said,

The short time separation has worked for them as they were seen celebrating their 6th Anniversary on 21st November 2020. He shared a photo on Instagram of the celebration.

Does Chris Tamburello have a child?

Even though Chris is private about his married life, it is known that he has a son. His son Christopher “CJ” Tamburello Jr., was born in the year 2016. He did not reveal about having a son until 2017 when MTV showed some clips of his son on The Challange: Invasion. But they chose not to share the age of his on.

Who is Chris’s wife Lilianet Solares?

Lilianet Solares is a former model who was born in Cuba. Her family moved to the USA after her birth and she spent her childhood in the Miami area. Solares has modeled for Empire BBK and they have shared some of her modeling shoots. She was interested in commercial auditions but is not active in modeling anymore. It seems like she has left modeling.

Unlike her husband Chris, Solares is very private about her life and does not make media appearances. She had an Instagram account in the past but she is no longer on it now.

He had a brother named Vincent who was shot and killed in Vermont after a dispute with another man. Vincent’s killer was found guilty and was sentenced to prison. Chris is of Greek, Italian, and Irish descent. He has a close relationship with his family.

He graduated with a bachelor’s degree in business administration from the University of Massachusetts at Amherst. He used to work full-time at night as a bartender at a nightclub apart from going to college. When he was at college, he was a member of the school’s basketball team which competed in the Division III Little East Conference.

Also read Jordan Wiseley and Tori Deal split a year after engagement! Know about their relationship and the early life of Jordan

Chris ‘C.T.’ Tamburello is a famous television personality from America. He came into the spotlight after appearing in the reality series on MTV, The Real World Paris.

Furthermore, he is a regular member of the MTV series ‘The Challenge‘. Read more bio…