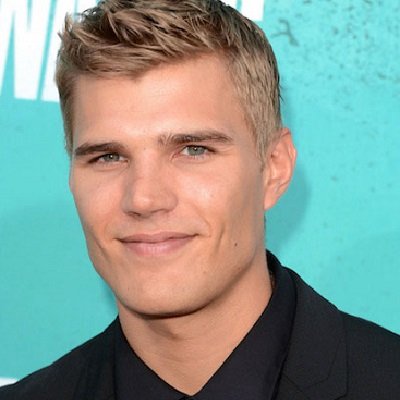 In a film you only get two hours to do this big arc and so you have to pick and choose your moments carefully, but with television you get to take your time and just take it episode by episode and discover new things.

My mentor Jon Simmons introduced me to the Stanislavski system, which is so heavy on back-story. So you write and write and write these back stories about a character and then you throw it away. So then on set, if it doesn't come, then you didn't do your work.

Before that, he was engaged in the TV personality, Paris Hilton. The actor proposed to her in January 2018 with the 20-carat diamond ring that worth $2 million. They dated for around one year.

However, they called off the engagement in November 2018. Later, Hilton called this decision one of the best decisions of her life.

Prior to that, Chris was engaged to the model Hanna Beth Merjos in April 2014. However, this engagement was also finished in 2015.

Who is Chris Zylka?

American Chris Zylka an actor and model. He is renowned for the roles of Jake Armstrong in The Secret Circle and Tom Garvey in The Leftovers.

Last, in 2020, he appeared in the TV series, Dare Me as Corporal Kurtz.

He was born Christopher Michael Settlemire on the 9th of May 1985 in Warren, Ohio, USA. His father is of Germanic ethnicity. His mother is of Polish-Ukrainian-Slovak ethnicity.

Chris is raised by his single mother. While talking about his father, he never met his biological father.

In 2003, he graduated from Howland High School. Later, he joined the University of Toledo to pursue Arts. However, he had to drop out of the University after two years to take care of his ill maternal grandfather.

After dropping from the University, he moved to Los Angeles to pursue his career as an actor. However, his initial journey to his career was not so easy. For six months, the struggling actor lived in Los Angeles as a homeless. At the time, he lived in his car and car parking.

At the time, he worked in the restaurant where he met the manager and acting coach, Jon Simmons.

In 2008, Chris Zylka met his acting debut through the TV series, 90210 in the guest’s appearance as Jason. Following that, he appeared in the recurring role in the comedy-based drama, Everybody Hates Chris as a white Muslim kid.

In the year, he landed the role of Jake Armstrong in the series, The Secret Circle. In the supernatural horror series, he appeared as a witch. Through the series, he earned fame as an actor. However, the series couldn’t do well commercially.

Apart from the series, he is a well-known face in the movies too. Some of his movies along with the year and the character name are-

Through his career as an actor and model, he has made a net worth of $4 million. His earnings as an actor are in the range of $19k to $208k.

Some of his movies’ collection along with the year is-

After the spilling with Paris Hilton, there was a huge controversy regarding the engagement ring worth $2 million. Chris wanted the 20-carat diamond ring back. However, Paris was not in the mood to return the ring as the ring was not purchased by Zylka as it was gifted by one of Paris’ friend, jeweler Michael Green.

However, one of Chris’ spokesperson claimed that the ring was purchased by Chris himself.

Chris Zylka is a blue-eyed auburn. His height is 6 feet and 1 inch and weighs around 80 kg with a build body type. His chest size is 43 inches and has a waist size of 32 inches.

You may also read the bio, age, education, career, net worth, salary, controversy, and rumors of Kim Basinger, Julianne Hough, and Matt Dillon.

In Paris Hilton-Chris Zylka split, the bone of contention now is the engagement ring! Who purchased it?

Paris Hilton Is Engaged To Her Boyfriend Chris Zylka; Here Are Few Things You Did Not Know About Paris’s Fiance Chris Zylka