Posted by MarriedBiography Posted on December 6, 2020 | In Dating , Divorce , Net Worth
Share this 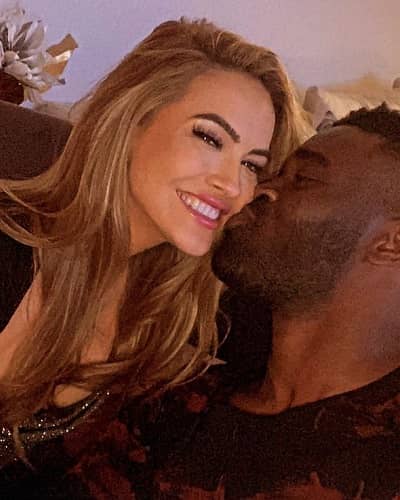 Chrishell Stause has moved on from Justin Hartley as she confirmed dating Keo Motsepe. Keo is a South African dancer from Dancing with the Stars. Keo has dropped some pictures and videos of them looking all cozy together. He is the first man whom she has dated since her divorce from Justin Hartley.

Even before confirming their relationship Stause and Motsepe were seen working out in Beverly Hills. They were photographed leaving a gym with their arms wrapped around each other’s backs.

There is a photograph of him kissing the top of her head. Chrishell should her toned belly wearing a cropped camouflage sweater along with clinging black leggings and white sneakers.

“Things have been heating up and they’re very into each other, but it’s not super serious,”

Some times before Chrishell was rumored to be dating her dance partner Gleb Savchenko which came out to be just a rumor.

Also read Rebel Wilson encourages her plus-size fans by revealing that she had started dating boyfriend Jacob Busch when she still was overweight!

Chrishell Stause and Justin Hartley met each other in the year 2013 after being introduced by a mutual friend and started dating soon after that. The two made a red-carpet debut as a couple at an LA event in January 2014.

They got engaged after a year of dating in July 2015. They walked down the aisle on 28th October 2017 at the Calamigos Ranch in Malibu in front of 75 close friends and family.

They were living a happily married life until November 2019 when Justin filed for a divorce. As per a source,

“People close to Justin and Chrishell are completely shocked by Justin filing for divorce. The couple has always been incredible, with no signs of things being on the rocks. Friends are speculating this was an impulse on Justin’s side due to something that happened, and are hopeful the couple can work things out.”

Chrishell legally dropped his last name in 2020. Their divorce has not been finalized yet.

How much is the net worth of Chrishell Stause?

Chrishell Stause has an estimated net worth of $5 million. She has appeared in film and series like Dancing with the Stars, Selling Sunset, Eve of Abduction, The Young and the Restless, Misguided, Mistresses, Another Time, Meanwhile, Youthful Daze, Days of Our Lives, Hot and Bothered, Body of Proof, All My Children, and many more.

In the year 2019 she and her ex-husband Justin Hartley bought a house for $4.65 million. It was a newly-built house in Encino, California. Likewise, it is a modern farmhouse style 6,700 square foot home.

Chrishell Stause is an American actress and writer who is well known for her role in the show Selling Sunset, All My Children, Days of Our Lives, and as the wife of actor Justin Hartley. Read more bio…

Anna Friel breaks up with boyfriend Mark Jarowski but says that it has made her stronger!
Tags : Actress Dancing with the Stars