Talking about her relationship details, Christen Press is presently single and she is not dating anyone at the moment. It is rumored the athlete is dating Nima Majd. However, none of them have made any statement yet. They together attended high school together and were speculated to be dating each other.

Additionally, the athlete is rumored to be a lesbian. Press is doubted to have a relationship with Tobin Heath. Tobin is also an American professional soccer player. They shared some happy moments during quarantine in Portland in 2020. 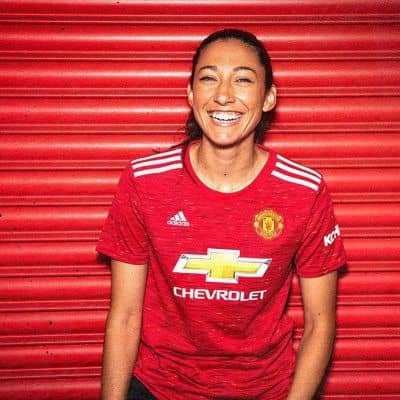 Who is Christen Press?

Christen Press is a well-recognized American soccer player. Christen Press plays for the United States national team and has made 155 appearances for her country.

Moreover, she was the recipient of the Hermann Trophy in 2010 and holds the all-time scoring and assists records at Stanford Cardinal.

Christen Press was born on 29 December 1988. At present, her age is 32 years old. Likewise, her birthplace is Los Angeles, California, the USA.

Christen is the daughter of her father, Cody Press whereas her mother is Stacy Press. Moreover, she has two sisters named Channing and Tyler Press. Her dad was an American football player at Dartmouth and her mom was a tennis player

Talking about her nationality, Press holds an American identity whereas her ethnicity is Spanish.

Christen started playing soccer at an age of five. She played with the American soccer, women’s team, Pali Blues in the 2009 and 2010 seasons. Later, she played for the fellow American soccer club, Magic in 2011. Press debuted for her fellow team against the Seattle Reign on 27 June.

After moving to Sweden, Christen signed with the Swedish top-level professional women’s club, Kopparbergs/ Goteborg Fc in the year 2012. She also led to winning the Swedish Cup in the same year. The sportsperson joined the fellow Swedish women’s football club of Tyreso FF in 2013 before returning to the USA.

The athlete then became the captain of the Chicago Red Stars after participating in the FIFA Women’s World Cup. Press remained the top scorer with 11 goals for her team. On the other side, the star player joined the senior US soccer team after playing for the youth team of the US.

Officially, Christen debuted against Scotland on 9 February 2013 and scored her first international goal. Their team won the Algarve Cup in 2013 and 2015 editions. They also won a winner’s gold medal a the 2015 FIFA World Cup.

Till now, the superstar has made 155 international appearances whereas she has scored 64 goals. She has won some tournaments and trophies such as Hermann Trophy in 2010, America Player of the Year Award in 2010, and so on.

A famed soccer player, Press has earned a handsome amount of money from her sporting career. She lives a quality lifestyle along with her family.

It is reported that Christen Press has an estimated net worth of $1.5 million. She has also featured in different advertisements and promotional pieces for Nike. She also featured in a promo for Wheaties breakfast cereal in 2014.

The athlete then performed in a TV commercial for Coppertone. Later, she became the brand ambassador for nutritional product Genesis Today.

However, – has not disclosed her exact salary, earnings, and assets details till now.

It is rumored that Christen Press is a lesbian. However, she has never spoken anything related to it. Other than that, Christen has never been part of any controversial matter or rumors till now.

It seems that Press prefers enjoying her personal life and does not want to merge it with her professional life.

32 years old athlete, Christen has beautiful looks and no doubt she has an athletic complexion. She stands at a height of 5feet 7inches. Also, she has a balanced bodyweight of 61 kg.

Furthermore, Press has brown eyes whereas her hair is black.

Nevertheless, the sportsperson has never mentioned other physical details in the public yet.

Regarding her social media presence, Christen Press is an active personality on social media. Christen has more than 812k followers on her official Instagram account @christenpress.

She is also active on Twitter with around 545.2k followers.

Moreover, Press is also available on Facebook with nearly 344k fans and supporters.