Christian Kane is an American renowned actor, singer, and songwriter. 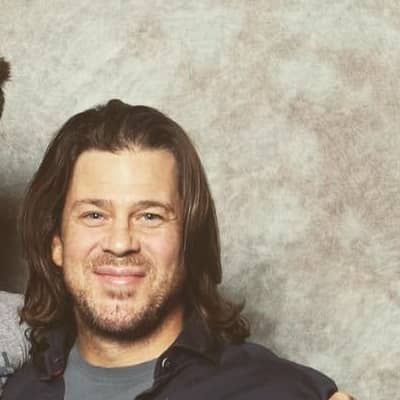 Christian Kane so far has not been spotted or linked to any of the girls and his co-stars or celebrities as of now. He is more focused on his career and doesn’t want to involve in a romantic relationship. Thus, he is obviously single.

Past relationship and Affairs

Similarly, Kane started dating Sofia Pernas in the year 2011. Sofia is also a well-named model and actress. The couple split up after two years of relationship due to their personal differences. Furthermore, he dated Linda Brava back in 1997 till 1998.

Who is Christian Kane?

Christian Kane is an American renowned actor, singer, and songwriter. He rose to fame for his prominent role on television series like Into the West, Angel Leverage, and The Librarians.

He is also best known for his role as “Peter Prentiss” in the romantic comedy film, Just Married (2003) and as “Agent Mullins” in the action-comedy film, Taxi (2004). Further, he is the lead singer of the country-southern rock band Kane.

Christian was born on June 27, 1972, as Christopher Michael Short. He hails from Dallas, Texas. He was born to his parents Billy Michael (father) and Pamela Ann Frazier (mother).

His parents were met for the first time at a rodeo where they both participated. Kane’s father was in the oil business so, Kane has spent most of his childhood around the South and the Midwest. Kane has also a sister named Jennifer Le Ann.

Talking about his nationality, he is of American citizen and belongs to Cherokee Native American. Moving towards his academics background, he enrolled at the University of Oklahoma where he studied art history.

However, he hasn’t finished his degree because in the mid he headed to Los Angeles to pursue an acting career.

After moving to Los Angeles Kane worked at a talent management company where he delivered scripts in exchange for getting acting jobs. In 1997, he made his acting debut as one of the leads in MGM’s television series, Fame L.A. He played the role until 21 episodes as Ryan “Flyboy Legget”, a country singer who moved to Los Angeles from Kansas.

Afterward, he appeared in the main role as Wick Lobo in the 1999 series, Rescue 77. From 1999-2004, he was cast in the role of Linsey McDonald until 21 episodes in The WB’s series Angel. That year, he made his on-screen debut in the movie, EDtv.

Similarly, he made an appearance in the film like Love Song (2000), Life or Something Like It (2002), Secondhand Lions (2003), Friday Night Lights (2004), and more. Kane was featured in the 2007’s Carrie Underwood music video “So Small”, playing the role of one of the three converging stories

In 2009, Kane appeared in the Western drama film, The Donner Party as Charles Stanton. The film is based on the true story of the Donner Party starring Crispin Glover, Clayne Crawford, Michele Santopietro, and Mark Boone Junior. Furthermore, he has also given his voice to the character Peter Madsen in the 2006 video game, 24: The Game.

The band has self-released two albums, Kane (2002) and Acoustic Live In London! (2004), a recording of a live acoustic set. At first, the band signed to the independent record label, Bigger Picture Music Group. On December 7, 2010, their label debut, The House Rules which peaked at no. 1 on the Billboard Heatseekers album chart and no. 25 on the Country Albums chart.

Similarly, their first single from the album also titled “The House Rules” peaked at no. 54 on the Billboard Country Song chart. On July 11, 2011, the band released their second single, “Let Me Go”. Kane is the writer of Trace Adkins’s 2010 album, Cowboy’s Back in Town’s song “Happy Man”.

To date, Kane has managed to maintain a clean profile. He hasn’t been part of any sorts of rumors and disputes that create a huge buzz in the media. Also, he stays miles away from such controversial acts that could hamper his personal life and professional life.

As of 2021, Kane has an estimated net worth of around $6 million throughout his successful career as an actor, songwriter, and singer. Further, his salary, yearly income, and real estate are still under review.

The actor has an athletic body type with a fair complexion. He stands at the height of 5 feet 7 inches tall and weighs around 72 kg.

Likely, his chest, waist, and biceps sizes are 42, 33, and 15 inches. Kane has a dark brown hair color with a blue pair of eyes.

He has also a self-titled YouTube channel with over 34.2k subscribers. Moreover, he is available on Spotify and iTunes.